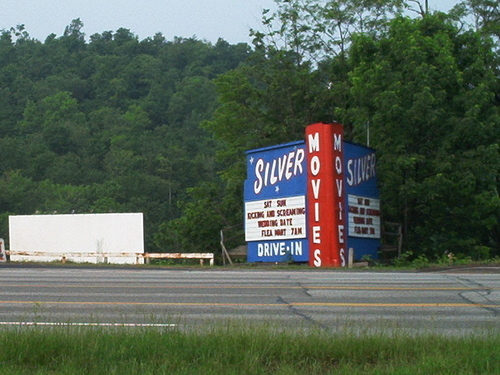 Located in Johnstown, PA. The Silver Drive-In opened in 1957.

Here is a photo of the marquee:
http://tinyurl.com/38en4f

This is not the “largest screen in PA.” Not even close. The Circle Drive-In in Dickson City has a screen which is roughly 105 feet wide. The screen at the Silver is just under 90 feet wide, probably closer to 85 feet.

Most drive-in theatre’s claimed to have the biggest screen when they first opened. Back in the day a lot of movie goers would only go to their local drive-in only.

Its web site currently has its account suspended and its official Facebook page didn’t have any posts for four years, but it does appear that the Silver was active in 2017. The Tribune-Democrat mentioned it in May as one place to watch summer blockbusters, and the Silver added a See You In The Spring post to Facebook in October.

The Silver was listed in the 1961-66 International Motion Picture Almanacs, capacity 300, owner or booker Bud Thomas Cir. It persisted there through at least 1976. The 1978-88 editions listed it in Windber PA, owner County Amus., capacity 400.

A 2008 article in The Tribune-Democrat said that “The reopening of the Silver Drive-In in 2005 fulfilled Rick Rosko’s dream of owning a first-class outdoor theater.” Which means that the Silver was closed for a while? Also, several Trib-Dem articles referenced a 1950 opening for the Silver, but I’d guess they were confusing it with the Westmont, which closed in the early 1960s after the Silver opened.

Also, a July 1975 newspaper ad showed that the Silver was already a “CAC” (County Amusement Co.?) theater at that point.

Aha! The July 8, 1950 Billboard wrote: Maurice Fruhlinger, for many years manager of the Met Theater, Baltimore, for the Schwaber Circuit, will manage the soon-to-be opened Silver Drive-In at Winber (sic), Pa.

A 1948 wedding announcement said that Fruhlinger, already managing the Met, was from Windber but would move to Baltimore. Whatever brought him back home two years later might make an interesting story.