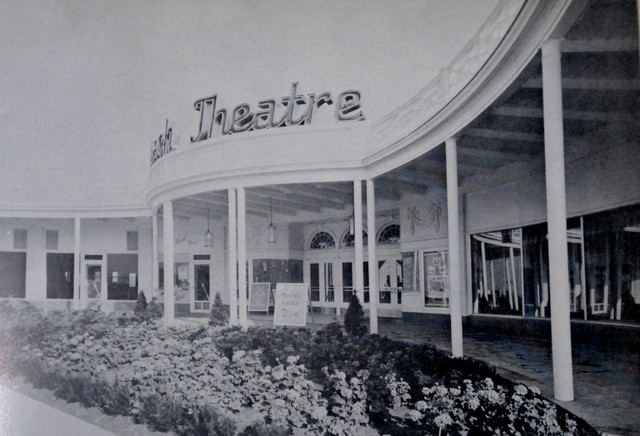 The Beach Theatre opened June 29, 1950, with 800 seats and the movie “The Father of the Bride”. It was built by Cape May’s pioneer showman William Hunt. Philadelphia theatre architect William H. Lee won a national architectural award for his design.

Architect William H. Lee was a distinguished theatre architect whose career lasted more than half a century and a variety of styles. Some of the theatres he designed are still showing movies, including the Anthony Wayne and Bryn Mawr, on Philadelphia’s Main Line, and the West Shore Theatre in New Cumberland, PA. Converted for live shows are the Majestic in Gettysburg, the State in Easton, PA and the Miracle Theatre in Florida. The Landis in Vineland, NJ is being restored.

The September 20, 1950 Exhibitor magazine stated that ‘The architect blended his design of slender colonial like columns, lace-like balustrade and colonial lanterns to blend with the general mid-Victorian architecture of the resort. Natural wood paneling with exhibits of contemporary artists with an adjacent TV lounge were the special features of the foyer’. Television in the lounge could not actually be seen for another two years, though, as it was yet broadcast in Cape May. Lee included four gas lanterns as part of his revival design.

The large lobby could accommodate 200 people. It had a hand painted mural of the ferry coming into Cape May, and the mural included historic figures related to Cape May. The Hunt family rented space to a candy store. Behind the foyer candy counter, with its quilted leatherette front and glass top, was a comfortable lounge with tables and chairs. Crystal chandeliers hung from the acoustic tile ceiling.

Two eagles with wings spread full dominated the patriotic motif of the huge gold medallion mounted on the green side walls of the auditorium. Throughout the theatre, there was a green and gold color scheme, devised by decorators David Brodsky Associates.

In the 1980’s, the Beach’s auditorium was divided into four auditoriums. The outdoor flower gardens, which had hundreds of beautiful red geraniums, was removed.

Owner Frank Theatres closed the Beach Theatre and proposed demolition. On November 17, 2007 the theatre was reopened by the nonprofit organization Beach Theatre Foundation, Inc. under a one year lease. The foundation sought to purchase the theatre and change it into a two-screen movie house with a large auditorium of 500 to 600 seats, and a screening room with 75 to 100 seats.

In May, 2008. the nonprofit group Preservation New Jersey listed the Beach Theatre in its annual list of the state’s 10 most endangered historic sites. In September, 2009, the theatre closed after the summer season. Frank Theatres again announced intent to demolish the theatre. In 2011, the City Council overruled the recommendation of its own Historic Preservation Commission and took the matter away from the Zoning Board which had been holding hearings on the matter. In September, 2011 Frank Theatres had the auditorium demolished, in order to construct a condo residential building.

Contributed by tc, Howard B. Haas
Get Movie Tickets & Showtimes

Here is an update; things are rather dismal – the not-for-profit that ran the theater is out of funds, and the city is demanding a loan it made to the foundation be repaid; the foundation is also being sued by Frank Theatres. Story here: View link

Ugh what a sad ending to a great theater. And to think the Frank company is opening yeat another theater.(see the news from a few days ago)

This article has some additional information, though no really good news: View link

The latest episode in the saga of the Beach 4: View link

The theater now appears to be doomed; the City Council has overuled the recommendation of its own Historic Preservation Commission and taken the matter away from the Zoning Board which had been holding hearings on the matter. Story here: View link.

Sadly, I’ve heard it is being demolished this week, but haven’t verified that info.

The theatre has been torn down

Article in todays Star Ledger reported that the permit was issued on Monday, and hours later heavy equipment was there tearing it down. Very very sad indeed.

Link to Star Ledger article (though not auto link) http://www.nj.com/news/index.ssf/2011/09/demolition_starts_at_beach_the.html