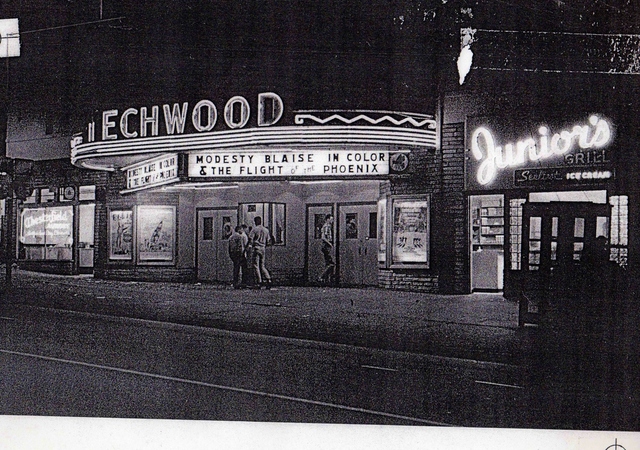 The Techwood Theatre was opened January 19, 1939 with Deanna Durbin in “That Certain Age”. This was one venue I never got the opportunity to visit before it closed. It was still open in 1966, but was demolished in 1970.

The Techwood Theatre was a second run house that was located near the campus of the Georgia Institute of Technology (that’s Georgia Tech, folks). The theater was west of the Varsity Drive-In and the viaduct over I-85 on North Avenue. Although it did occasionally show first run features that were on multiple runs in the 1960’s, it was never really a first run venue.

My dad used to take me to the Techwood occasionally back in the 1950’s. What I remember most about the theater was its Neo-Classical facade. Apart from that, 500 sets sounds about right. When I went there so many years ago the theater seemed well maintained.

The Techwood Theatre was located on the southwest corner of the intersection of North Avenue and Techwood Drive. The theater was adjacent to the Techwood Homes, a Federal Housing Project that stood along Techwood Drive, which were originally built in the 1930’s. This project was demolished to make way for the dormatories that were built for the 1996 Olympics and are now a part of the Georgia Tech campus.

This information seems to have been deleted from my original post, so I thought I’d add it just for clarity.

So does this theater still exist?

No, the Techwood Theatre was demolished circa 1970, as I recall.

Newspaper ad from August 1964 and a write up on the feature opening that day:

I went to Ga. Tech in the late 1950s. Around 1959 I lived in an old apartment on the corner of North Ave. and Williams St., next door to the Techwood Theater. The Techwood had a store front on both sides. The right hand side was Jr’s. Restaurant (It later moved onto the Tech campus). The left side was a laundry.

The audience were Tech students and some Techwood Homes residents. No one was bashful about shouting comments about the film.

I went regularly to The Techwood during WW II and less frequently in the 50s. I lived with my family in an apartment at 663 W. Peachtree St., about 3 blocks northeast of The Techwood. Saturday was my favorite day to attend because there were always double features. Cowboy and war movies, with an occasional monster or comedy was the usual fare. It cost .09 cents and then 0.12 cents after the war for under 12 kids. Most were under 12 no matter their size. The front row was our favorite seats and the only bad thing was, like all neighborhood theaters of the time, you couldn’t go barefoot comfortably because the floor was always very sticky. walterb, atlanta

I attended Georgia Tech from 9/64 to 12/65, and frequently attended the Techwood. It was a part of the Storey chain, usually second run, with admission of 75 cents (first run was $1.50 in Atlanta at the time). By then it was somewhat run down, with water stains on the ceilings and side walls. There was no balcony; the rest rooms were upstairs, and you could see into the projection room, which was also furnished as an efficiency apartment. There were frequent projection errors, with the screen going blindingly white, and the flap-flap-flap as a rewinding reel went untended. Going by ticket numbers, they were doing about 900 to 1000 75cent admissions per week in late 1965. The theatre, Jr’s grill, laundry, and the Tech Motel on that block were all demolished and Google street level shows Ga. Tech offices there now.

This opened on January 19th, 1939. Grand opening ad in the photo section.