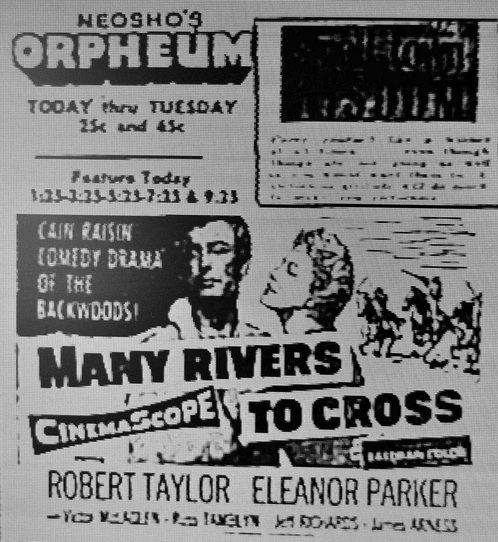 Robert Boller was the architect of a 1953 remodeling of the Orpheum. The project included removing the stage and installing a CinemaScope screen. Boxoffice of January 6, 1954, said that the auditorium’s capacity had been increased by 25 seats as a result of the project.

Todd G. Higdon’s reminiscence about the Orpheum Theatre in the Neosho Daily News of March 7 this year says that the last movie he recalls seeing there was Moonstruck in 1988, so the house lasted at least that long. The Orpheum has since been demolished. There is a photo of the Orpheum on this Facebook page, with a 1951 movie on the marquee.

The Orpheum was advertising in the August 30, 1921, issue of the Neosho Daily Democrat, so it was in operation at least that early. A comment on this page of a Neosho community forum says that the Orpheum was built as an opera house. The 1906-1907 edition of Julius Cahn’s guide lists the Neosho Opera House as a 600-seat theater, but fails to mention if it was on the ground floor or not. Quite possibly this was the house that became the Orpheum, though if so it was a rather plain building for even a small town opera house, unless the facade had been remodeled before that 1951 photo was taken.

Other comments in the forum say that there were once theaters on all four sides of the town square in Neosho, including one called the Lux on the south side and one called the Bandbox on the west side.

I found a 1913 reference to a house in Neosho called the Lyric. One early movie house in Neosho was opened around 1907-1908 by A. V. Cauger, later the founder of the Kansas City Slide Company, one of Walt Disney’s early employers.

This web page, Neosho and High School, is from a memoir by Russel R. Windes, who became an usher at the Orpheum Theatre about 1944 at the age of fourteen. There are quite a few paragraphs about the operation of the theater, including a couple of funny anecdotes worth reading. Windes names the other two theaters operating in Neosho during the war years as the Carmar, named for owner Hugh Gardner’s daughters, Carolyn and Marilyn, and the Photosho. I don’t know if Photosho was an AKA for the Lux or Bandbox or not, but the Carmar shows up in this vintage photo showing the east side of the square, ca.1943.

It turns out that the Orpheum Theatre was not the old Opera House renamed. The June 30, 1920, issue of the Neosho Daily Democrat had an article about the purchase of the Whiteway Theatre by Hugh Gardner. The Whiteway had been built by G. D. Hall in 1917, after his Dreamland Theatre, located in the old Opera House on the north side of the square, had been destroyed by a fire on December 1, 1916.

The 1920 article said that Gardner intended to rename the Whiteway the Photosho Theatre, but later issues of the paper spelled the name as Fotosho. The February 7, 1921, issue of the Democrat said that Gardner was converting a nearby store building into a movie theater and would move the name Fotosho to the new house. The March 4 issue of the paper said that the former Whiteway/Fotosho Theatre would reopen that night as the Orpheum Theatre, presenting moving pictures and vaudeville.

This house opened on May 26, 1917, as the New Dreamland Theatre. Within a few months it was being advertised as the White Way Theatre, which was later changed to Whiteway Theatre. An item about the opening appeared in the May 31 issue of the Neosho Daily Democrat:

“The New Dreamland Theatre on Wood street was opened Saturday afternoon by Manager G. D. Hall and the first picture presented there was ‘Miss George Washington,’ by Marguerite Clark. The new picture-show was not quite finished as there were many little things to be done but it was far enough along to present the pictures. The house was filled in the afternoon and at night two shows with full houses were given. The new theatre is the largest and best that Neosho ever had. It is on the ground floor and practically fire proof. The stage is large enough for large dramatic companies and it is built in modern style.”Pointing out that the house was on the ground floor suggests that the old Opera House/Dreamland was probably an upstairs theater.

I used to go to the Orpheum Theater in Neosho MO as a kid in the late 70’s and early 80’s. I remember seeing movies such as “Heaven Can Wait”, “Grease”, “First Blood”, and “Rocky Horror Picture Show”. Some good times indeed!