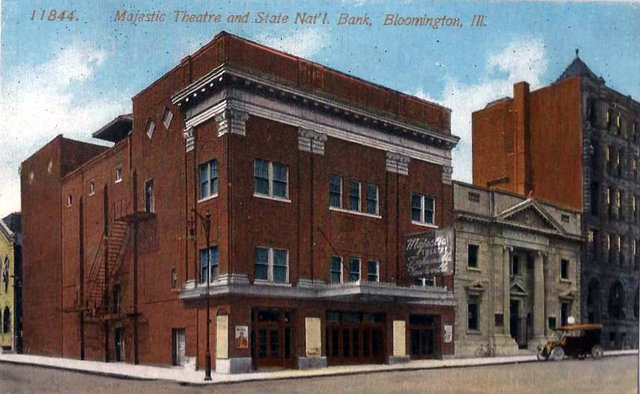 The New Majestic Theatre was opened on April 18, 1910 with vaudeville and the ‘Majestiscope’ as part of the program. It was designed by an architect named Cooney. It was equipped with a Barton pipe organ. It was remodeled in 1920 to the plans of architect Aaron T. Simmons. The science fiction writer Wilson Tucker worked at the the Majestic Theatre as a projectionist and electrician. It was demolished in April 1956.

I was born and raised in Normal, Illinois, across the street from Bloomington and move away in 1960. The Majestic Theater was located one block East of the intersection of Main Street and Washington on the Southwest corner katty corner from the Bloomington Library. I was born in 1938 and I can never remember the theater being open. I remember being told that is was closed in the early 1930s. The theater was torn down in the 1950s and replaced with a savings and loan.

I am wondering if this is where the current Michael’s restaurant is located today. The fascade of the building looks like it may have been a theater and there is a marquee. I have not been inside this building but I have wondered if it was a theater at one point.

From the 1930s a postcard view of the Majestic Theater in Bloomington.

The April 2, 1910, issue of The Billboard said that the new Majestic Theatre in Bloomington was nearing completion and the owners hoped to open on April 11. Guy Martin, manager of the Castle Theatre, was slated to be the manager of the new house. The theater actually opened on April 18, according to the article btkrefft linked to earlier.

The Castle Theatre mentioned in the Billboard item was not the house of that name built in 1916, but an earlier theater which opened in 1904 in a remodeled building on the corner of East and Washington Streets. The fact that the manager of the Majestic was coming from the Castle Theatre raises an interesting possibility. The two houses might have been under the same ownership, and thus it is possible that the Majestic was a new “Castle Theatre” that was a subject of discussion at the December 17, 1909, meeting of the Bloomington City Council. This is from the text of the minutes of that meeting:

“His Honor, the Mayor, called the attention of the Council to the presence of the contractor and architect for the building of the new Castle Theatre.

“On motion of Ald. Kerrick, the rules were suspended and Mr. Solomon, the contractor, addressed the council stating the construction of the building was not in accordance with section 1201 of the Building Ordinances, as the new mode of constructing buildings is to carry all roof trusses on pilasters and the walls are known as curtain walls and only carrying their own weight. Mr. Cooney, the architect, spoke on the same strain, saying, that the construction was of a better nature than called for by the City Ordinances.

“Ald. Costello offered a motion to allow the contractor to proceed with the building under the supervision of the Superintendent of Buildings and Board of Inspection of Buildings.

“Carried.”The timing of the opening of the Majestic is compatible with a project that was getting underway in late 1909, and the fact that a new Castle Theatre actually was built in 1916 would suggest that the 1909 Castle Theatre project was either left unbuilt, or was opened under a different name- the Majestic. Photos showing the east wall of the Majestic show that it did indeed have pilasters, as discussed in the Council meeting.

I’ve been unable to find any other references to an architect named Cooney operating in the Bloomington area during this period, so I have no first name for him, but I’ll keep looking.

Opened in 1910, the Majestic Theatre fell to the wrecking ball in April 1956. Today, the Government Center building occupies the corner.

During the height of the vaudeville era, troupes of comedians, musicians, acrobats and actors arrived in Bloomington by train twice weekly, bringing with them carloads of sketch props, scenery, absurdly garish costumes, and trained animals. Vaudeville, it was said, was “big businesses with a bounce.”

The Majestic Theatre, located at the southwest corner of East and Washington streets, was Bloomington’s largest and most successful vaudeville house. Notable entertainers who performed on its stage included Fred Allen, Jack Benny, Bob Hope, Roy Rogers and Mae West.

The theater opened on April 18, 1910, and its inaugural bill – though it included no household names – had plenty of vaudeville punch. Opening night performers included Carl Emmy’s “$5,000 animal act” and the Holmen Brothers and their “European sensational comedy act on the horizontal bars.”

Built of red vitrified brick, the Majestic could hold 1,400 on the main floor and two balconies. Its opening represented nothing less than “a great epoch in the histrionic phase of the city’s life,” declared owner Maj. Max Goldberg. The interior frescoing featured “delicate pea greens, gold and old rose tints.” The “ladies' retiring room” (with “maids in attendance”) and “gentlemen’s smoking room” were on the mezzanine.

The extravagance, though, could not hide one ugly aspect of life in Bloomington: Blacks were seated separately from whites in specially designated, segregated rows.

In an age of horrific theater fires (in 1903, the Iroquois Theater tragedy in Chicago claimed more than 600 lives), Maj. Goldberg stressed the Majestic’s “modern and up-to-date” design that offered “utter freedom from fire, danger and panic.” There were six ground floor exits, and the balconies emptied by separate stairs and exits, with a fire escape on the exposed wall along East Street.

During its early years, Majestic tickets ranged from a high of 25 cents for reserved boxes to a low of 10 cents for the cheap seats in the balcony (or about $5.50 and $2.20 today, adjusted for inflation). In 1911, acts included King & Brown, described as “two men and a pair of legs,” or “comedy monopede acrobats.” There also was Harry Thriller, “the lad on the tables and the chairs,” and Hector, the mind-reading dog.

The history of the Majestic includes sublime observations of life on the vaudeville stage. To save money, the Marx Brothers ate in their dressing room, preparing a dinner of goulash cooked over a Sterno-type stove. And there was the time when an overzealous stagehand turned a too-bright spotlight on fan dancer Sally Rand, leaving little to the imagination. The next day (or so the story goes), the line for tickets stretched from the box office all the way to Front and Main streets.

Even in its earliest days, the Majestic faced an uphill battle against the increasing popularity of movies. By 1915, there were several small nickelodeon-type theaters in downtown Bloomington, such as the Princess at 412 N. Main St. and the Scenic at 304 N. Madison St. That year also marked the opening of the Irvin Theater in the 200 block of East Jefferson Street. This “modern photo play house,” with its impressive screen and 1,000 seats, was the largest movie theater in town. By the mid-1920s, the Majestic was the only place in town to see regularly scheduled live entertainment.

In November 1937, the Majestic played host to Blackstone, billed as “the world’s most mystifying magician.” His roll call of tricks included “The Spanish Fantasy” and “Girl in the Auto Tires.” Interviewed by a local news reporter, the magician also recalled an appearance 15 years earlier when Jim Tucker, a veteran Majestic stagehand, misread a lighting cue and illuminated the “vanishing horse” before it had rightly “vanished.”

What had vanished by the late 1930s, though, was vaudeville, which was unable to compete against movies and radio. By the late 1940s to early 1950s, the Majestic stood empty and forlorn. “Darkened with the passing of vaudeville and grown ugly out of disuse,” observed The Pantagraph in 1955.

The theater finally fell to the wrecking ball in April 1956. Crowds gathered to watch the old vaudeville house come down in a shower of bricks.

“The pigeons have lost a good home,” cracked one sidewalk wit.

“The old vaudevillians lost theirs a long time ago,” was the comeback from Pantagraph reporter Bill Harris.

I still haven’t found a first name for the Mr. Cooney who was probably the original architect of the Majestic Theatre in 1910, but the September 18, 1920, issue of Motion Picture News has this item about a remodeling of the house:

“Bloomington — The Majestic theatre closed on June 5th to be entirely remodeled. Mr. A. T. Simmons is the architect, in charge of the improvements. A new ventilating system and new operating booth and equipment are a few of the changes.”

Architect Aaron T. Simmons is best remembered as the probable designer of all 50 houses in the historic Cedar Crest neighborhood of Normal, Illinois, and of 71 Carnegie libraries in 13 states. The remodeling of the Majestic is the only theater project to which I’ve been able to connect him so far.

Backstage at the Majestic.