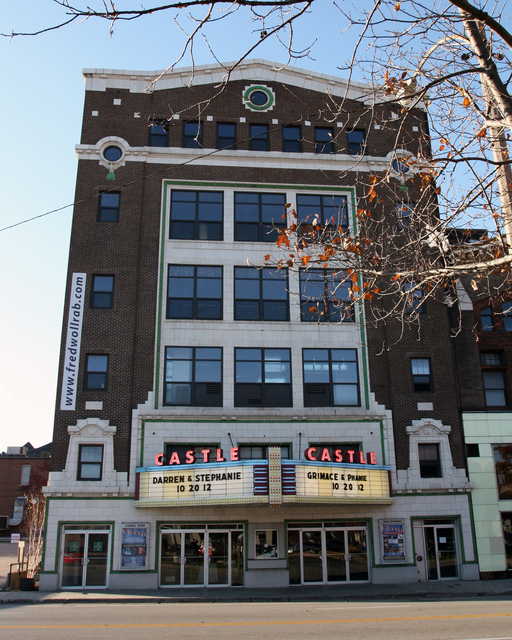 The Castle Theatre opened January 24, 1916 as a 1,000-seat movie theatre, and remained a popular Bloomington movie theater until 1988.

The Castle Theatre was reopened in 2003 after a much-needed restoration as a “brew and view” style first-run movie house but was closed again in January 2007.

A church, which has used the theater for Sunday morning services since 2005, continued to meet at the Castle Theatre until late-2010. New owners took over and it is now used as a concert venue.

Here is a February 2008 article about the church that uses the theater building:
http://tinyurl.com/64js2f

The theatre has been sold and the new owners are using it as a live music venue. Most of the acts are of the alternative music variety.

The Castle Theatre is still open as a live music venue. There is an official web site, and the house has at least one event per week booked through January, with other events scheduled into March.

The February 19, 1916, issue of The Moving Picture World ran an article about the opening of the Castle Theatre, which can be read in this Google Books scan. The theater was built by C. U. Williams, a Bloomington businessman who, along with being involved in various other enterprises, was a well-known publisher of picture postcards.

The Castle Theatre was part of the headquarters building of C. U. Williams & Son, and was originally operated under lease by William R. Lyon (or Lyons) and Delmar Schnepp. In 1923 the Castle was taken over by Clarence Irvin, who had been operating other theaters in Bloomington for more than a decade.

Many sources on the Internet claim that the Castle was originally a Balaban & Katz house, but it appears that B&K only became involved in the operation later. I’ve found references to the Castle being a B&K house by 1927. It was still being operated by B&K in 1949 according to this list on the Balaban & Katz Foundation’s web site.

This house was not the first Bloomington theater to have the name Castle. An earlier house of that name was under construction in 1904, when it was a subject of a petition from its owner that was read at the November 4 meeting of the Bloomington City Council. Mr. J. G. Gillingham was petitioning the Council to consider lowering the license fee for his theater, which he said would present vaudeville at low prices. Bloomington’s license fee for “Opera Houses” was $200 a year.

The petition notes that the Castle Theatre would be located in a remodeled building at the corner of Washington and East Streets, though it doesn’t specify which corner. The Majestic Theatre would open at the southwest corner of that intersection in 1910, and the Castle was still in operation at that time, so it was one of the other corners. I’ve been unable to discover whether or not it continued operating under a different name after this Castle Theatre opened in 1916.

CLARENCE IRVIN was the main theatre operator in Bloomington, Illinois and all of his houses were in partnership with Balaban and Katz and later ABC Paramount!

Wow, I remember the renovation of this theater occurring and that it only had just reopened, back in my brief Illinois State University days in the mid-2000s! Also recall reading about the church that had started to use the Castle, after I sadly(due to grades) was forced to drop out of Illinois State. Great to hear it’s being used as a music venue, as of now.