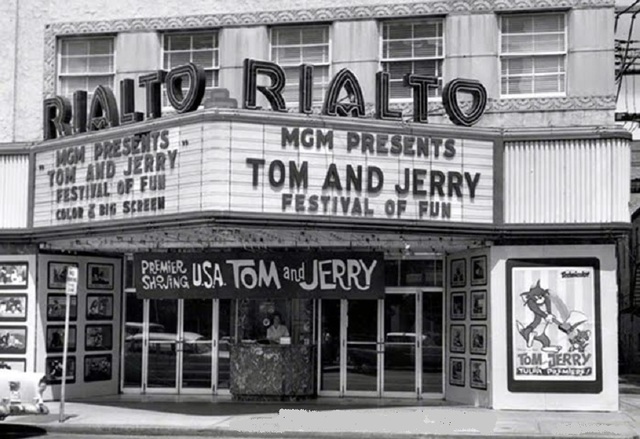 The Empress Theatre was opened around June 1913 and was designed by noted theatre architect John Eberson. It was renovated and reopened on January 20, 1918 as the New Empress Theatre. It was owned and operated by W.M. Smith. It was renamed Orpheum Theatre until around 1923 and when the adjacent Rialto Theatre was torn down to be demolished and a S.S. Kress store was built on the site, the Orpheum Theatre was renamed Rialto Theatre. It showed first-run films. It was still opened in 1955, but had closed by 1956. It was reopened and continued to operated until its final closure in late-1970 when it was demolished.

Architect L. B. Senter must have also designed Palace Office Supply over on Sixth & Boston Ave.
Note similarities between the two structures -
http://www.tulsalibrary.org/JPG/A0599.jpg

Around 1912 the World Newspaper Building was converted into Tulsa’s first Rialto Theatre. After the World Bldg. was demolished to make way for a high rise Kress five and dime store, Rialto signage was moved next door to rename the Orpheum Theatre. From the Tulsa Library/Beryl Ford Collection comes this 1905 image of the World Bldg -
http://www.tulsalibrary.org/JPG/B3813.jpg

A 4/11 Robert-Morton was then installed in the Rialto, to give the Rialto an organ with a console comparable to the 4-manual console at the Ritz, which was a competing theatre at that time.

The book doesn’t tell this, but after the Wurlitzer underwent many hours of donated early-morning and late-night maintenance, it was quietly removed from the Orpheum one weekend. It was taken to a home in the Dallas area, where it remains, and is currently playing.

The Wurlitzer Opus 691 was purchased in 1969 by a business associate of Alex Blue, the Orpheum Building’s owner, and moved to the man’s home in Dallas. This happened without the knowledge of Bill Roberts, Dorothy Smith and Phil Judkins, who rebuilt the organ in the early 60s. Several years later, that man bought a larger instrument and the Orpheum organ went to his son’s home in a suburb of Austin. The pipes are still there, but he added a 3 manual console and additional pipes. The two manual console of Opus 691, through an odd chain of events, is sitting in my basement “speakeasy” and screening room in Chicago and will soon play with digital samples. It was the first theatre pipe organ I ever played (when it was still in the Orpheum) and I worked as an usher and assistant manager at the Orpheum (also, occasionally, the Rialto) while I was in college. It’s my understanding that the organ was enlarged with a kinura, clarinet, and salicional celeste in 1924 and was moved to the Orpheum for the theatre’s opening in November of that year. At that time it became a two chamber installation, with chambers on both sides of the proscenium. It had been in only one chamber in the Rialto.

Wonderful historic shots on that link, cosmo. The Rialto must have had the very first V shape marquee angled to catch the eye of motorist.

That’s correct Kewpie. Across the alley to the west was the first Orpheum, which was originally called the Empress. When the new Orpheum opened on the south side of 4th Street, between Main and Boston, the old Orpheum was renamed the Rialto and the building shown in the post card was torn down. The S. S. Kress store was built on that site. It was an L shaped building, I believe, which wrapped around what later became the Holly Shop on the corner of 3rd and Main. Kress' had entrances on Main Street and 3rd Street.

You’re right, Katz. I was recently looking in the Ebersen archive and discovered the Rialto WAS designed by him in 1913 as the Empress. That makes three Ebersen houses in Tulsa, including the second Orpheum in 1924 and the Ritz in 1926.

Here is a bit of confusion provided by the January 12, 1918 issue of Exhibitors Herald:

“Tulsa, Okla.— W. M. Smith will remodel the present Empress Theatre for a moving picture house to be known as The Rialto. A contract has been let for the installation of a $14,000 pipe organ. Frank H. Cassil is manager.”

One explanation I can think of is that the first Rialto could have opened in 1918 and snatched the name before Smith could slap it on the remodeled Empress, so he settled for calling it the New Empress. But our page for the first Rialto doesn’t give its opening date, so I can’t prove that surmise.

The Empress is not listed in the 1914-1915 American Motion Picture Directory, so it was most likely still exclusively a vaudeville house at that time. Does anyone know if it was a Sullivan & Considine operation? Empress was that circuit’s favorite theater name.