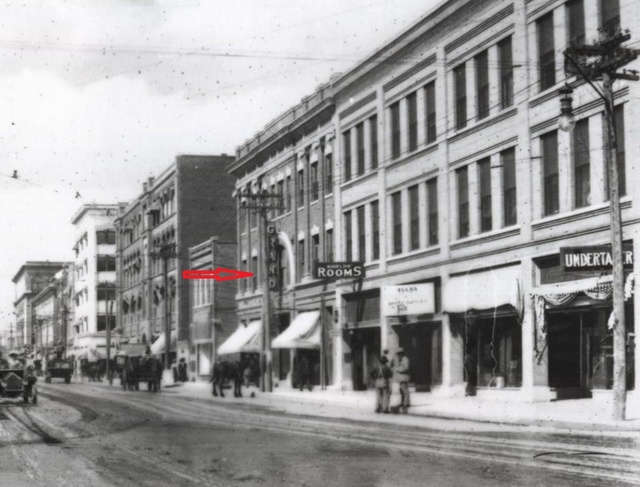 Designed by architects John Eberson & Joseph Foucart in a Colonial/Federal Revival Style, Tulsa’s Grand Opera House opened 1906 to showcase big time touring stage presentation and opera companies. It burnt down October 9, 1920 and was rebuilt, reopening in 1921. This theater was quite successful with touring opera vehicles until the mid-1930’s when depression era financial woes caused ticket sales to slump. It was then leased to feature Grand National Pictures, but still presented an occassional live stage show.

During the World War II years, the house became a popular newsreel venue, then briefly switched to second rate burlesque. Finally, during the late-1940’s, the Grand Theatre closed and was converted into a furniture sales showroom. It was demolished in 1973.

Here is a c1907 photograph of the Grand -
View link

Hear a recording of one of Gypsy Rose Lee’s burlesque routines …
View link
courtesy of this web site …
http://www.unicornmeat.com/

Courtesy of this album
View link

A 100-year-old tinted picture postcard view of the Grand Theatre can be seen on below site by typing in “tulsa second street looking west”,
View link

I’ve found two sources saying that the Grand Opera House in Tulsa burned in 1920. The first is this timeline from an Oklahoma genweb page. The second is more thorough, but also problematic as it gives the address of the theater as 117 E. 2nd Street. It is from the October, 1921, issue of the journal Safety Engineering:

Were there two different Grand Theatres in Tulsa, one block apart? The address discrepancy might be an error in the 1921 publication, or perhaps Tulsa renumbered its blocks at some time. The photos from before 1920 and from the much later period when the building had become a furniture store show that the facade of the theater was the same, fire or not. Presumably the building was only gutted. I’ve been unable to find any other sources providing information about the fire, or saying anything about the rebuilding of the Grand Theatre.

The address currently listed on this page is wrong then. The caption of the photo of the Opera House on this web page says that it was located on the north side of Second Street between Boston Avenue and Cincinnati Avenue. That’s the 100 E. block, so 115 E. Second would be the correct address, the entrance having been in the middle of the facade.

Kewpie’s links worked for me. Here they are embedded in glorious HTML: