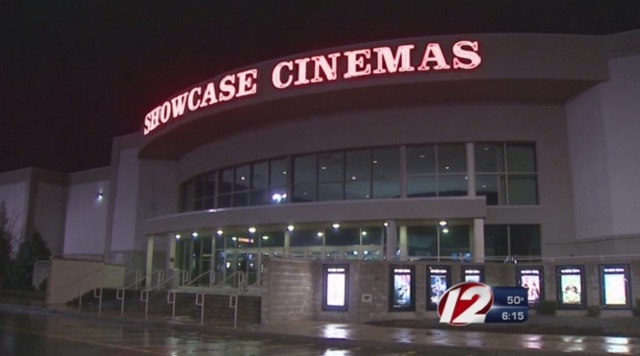 The Showcase Warwick Mall Cinemas is the second Showcase Cinemas multiplex built in Warwick, and in fact, in Rhode Island. This place is at the northern end of Warwick, near the border with Cranston. The other older one is down at the juncture of Route 95 and Quaker Lane. This theatre is also the second one to be built at Warwick Mall. The three-screen National General Warwick Mall Cinemas has been demolished.

I am a Projectionist at Cineworld.

Response to Gerald A, DeLuca: I don’t know how the cinema in question does things but the “lights down, seating music off” system works by a sensor reading “cues” whuch are attatched to the film itself. When the projector reads these cues it does certain things like lower lights, turn the cd player off and switch the audio feed to the film soundtrack. Basically what I’m trying to say is that it’s an automated system so the problems you experienced were technical and not the fault of the projectionist. Also as a projectionist it’s hard to pick up on a problem like that as the glass between the projector and the auditorium is, of course, soundproof, and the only way the projectionist can hear the audio is on a tiny speaker in the projection room which wouldn’t have played the cd player’s audio crossing over anyway. Hope this gives you a better idea as to what happened. Also, one person shouldn’t be in charge of all 12 screens, that’s understaffing, and that IS the cinema in question’s responsability as there should be at least 2 for H&S reasons.

In response to Donald Darko’s comments concerning the cues you are 100% right- if the cues get worn they need to be replaced, which theatres have you been a projectionist at? or currently working at? do you operate carbon arcs? platter systems or reel to reel?

Response to DOS 76: I am a projectionist at Cineworld (which is a UK chain just incase this a mainly american site.) Our cinema uses the platter systems. Not sure what you mean by carbon arcs, I’m not sure I’ve come across those unless they go by another name.

I’ve had good luck when I’ve complained to theatres. You complain to corporate headquarters and then they refer the complaint back to the individual theatre manager. That embarrasses the heck out of the theatre manager when corporate knows they did something shoddy.

I must say I’ve been to the “old” Warwick Showcase many times (the last time to see Spielberg’s CATCH ME IF YOU CAN) but haven’t been to the new Showcase at the Warwick Mall. I did go to the old National General theatre many, many times over the years. I think that is where I caught those Hitchcock films that were revived in the mid 1980s.

This theatre, despite its generic qualities like all the rest, is where I see most of the new Hollywood movies of interest to me. It is a 12 minute drive from my house. They also currently have $3.50-for-seniors Wednesdays as do a number of the National Amusements theatres in the area, with the notable exception of Providence Place 16.

i recently went a saw a movie here and made a complaint about the rest rooms they were dirty and looked like it had not be cleaned in days, when i wanted to make a complaint the manager was not available to speak with me- i was told the manager was not in- it appeared to me that he or she did not want to speak with me- someone had to be in charge… i even complained the owners of this theatre chain and no one even responded- it only shows me that no one cares

Yes. This theatre is closed due to extensive flooding just like the Mall. No word on when it will reopen, but the mall is saying three months.

Six of the twelve screens are set to reopen tonight.

This theater only plays new films and does not play films that are older, but, this theater is newer and unique, right now, it is playing films like Ice Age: Collision Course in 2D and 3D, The Secret Life Of Pets in 2D, Finding Dory 2D and a lot more, that’s just the kids movies. This is my main theater for newer movies, whenever I am interested into the older screenings, I go to Showcase Cinemas in Warwick on 1200 Quaker Lane. This multiplex has 12 screens, and perfect speaker sound to enjoy a film. This theater has been around since Spring 2010, it was made as a remodel because of National Amusements Showcase Cinemas Warwick Mall being demolished due to the flood, they also remodeled the whole Mall as well.