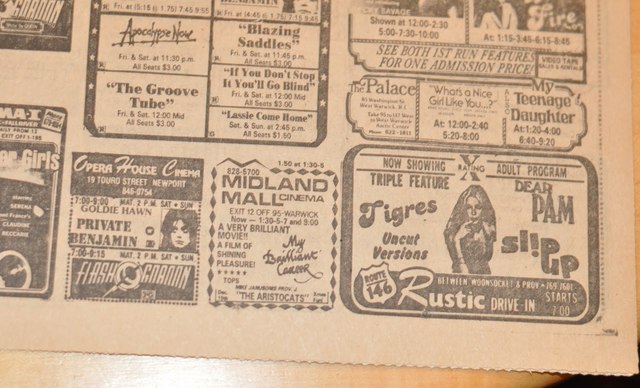 The small Midland Mall Cinema opened with the completed construction of the Midland Mall in Warwick, R.I. in the early-1970’s. The single-screen theatre showed mostly foreign films and specialized product during its not-extremely-long-life, but its limited versatility with only one screen, inability to outbid the nearby multiplexes for Hollywood product led to financial losses and the theatre shut down in 1984 and was replaced by a store.

I remember seeing a variety of Disney films at this theatre. It had an inclined ramp for an entrance and a long hallway that ran along the back of the theatre to the restrooms. I specifically remember seeing “Mickey’s Christmas Carol” here, and the place was packed. Those were the good ol' days.

Mike, they had some really top-notch art-house programs or move-overs here for a time, with an emphasis on French and Italian films. A quick search of my notes produces Goretta’s “The Lacemaker,” Visconti’s “The Innocent,” Monicelli’s “My Friends,” Herzog’s “Nosferatu,” Moreau’s “LumiÃ¨re,” “Sunday Bloody Sunday,” Huston’s “Fat City,” “Bugsy Malone,” Tavernier’s “Beau-pÃ¨re,” Fassbinder’s “Lola,” Beresford’s “Don’s Party,” a revival of “House of Wax” At that time one had three different choices in the area for art-house fare: the Avon, the Cinerama (two screens) and the Midland Mall.

When the Midland Mall Cinema first opened it was equipped only with 16mm projection! I remember peering into the projection booth and noticing this. 16mm prints required much less wattage to run and were cheaper to ship, but were hard to obtain from distributors for initial first-run showings. I believe that “The Sterile Cuckoo” with Liza Minnelli was one of the movies shown in 16mm here in 1970. Later they converted to standard 35mm projection.

I too remember this cinema and remember seeing Ingmar Bergman’s name on a marquee. That is not something you would see too often in a suburban theatre located in a mall.

I remember going there in the 1970s when they revived “House of Wax” in 3-D. And I remember seeing the re-released version of Speilberg’s “Close Encounters.” That was probably the last time I was there.

The Midland Mall has fallen on hard times. Last time I was there it was a pit. I remember how vibrant that place was when I was a kid.

I did not like the Midland Cinema. Tucked inside the mall, it seemed more like a screening room than a theater. Still, I enjoyed tremendously the few films that I went there to see, including “Pauline at the Beach” and “Cries and Whispers.”

I kind of liked it for its intimacy, actually, although I wish it had had a real lobby! I saw a large number of excellent films there, some of which I mentioned in an earlier posting. Hardbop’s posting is right. The place is turning into a ghost mall.

Ad ad from December 8, 1978 asserts that Robert Altman’s film A Wedding was then in its “10th Unbelievable Week.”

This was a pretty adventurous booking policy for a theater based in a suburban shopping mall.

I went here only one time that I can remember, and that was to see Alain Resnais film PROVIDENCE in 1977. I also remember seeing a banner advertising a late-night screening of NIGHT OF THE LIVING DEAD.

I remember seeing Bambi there as a kid.

BTW, you have the address wrong. That address is for the Warwick Mall. Midland Mall was at 650 Bald Hill Rd (renamed RI Mall).

I saw “The Night of the Shooting Stars” here on March 25, 1983, an Italian film by the Taviani Brothers. The theatre had pretty good programming.