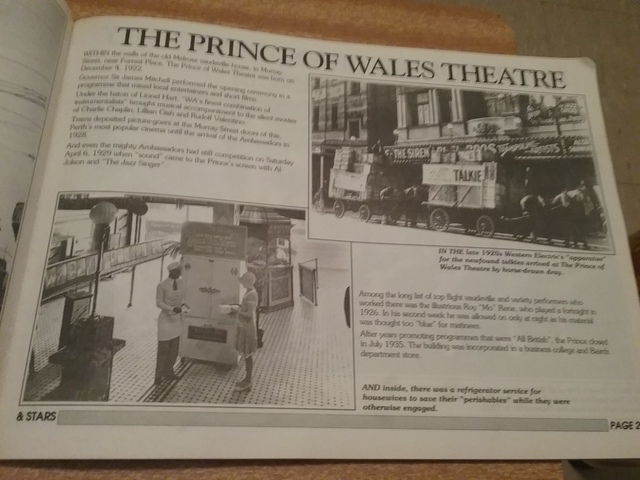 A refurbishment of the Melrose Theatre (which has its own page on Cinema Treasures). Opened in 1922 and seating 2,300, the Prince of Wales Theatre was Perth’s first genuine picture palace of the silent era. At the time of its opening, its competitors were much smaller and far less ostentatious, despite their names -Britannia Theatre (1915), Grand Theatre (1916), Majestic Theatre (1917), Pavilion Theatre (1921) and Palladium Theatre (1921).

Built by Sir Thomas Coombe on the site of the former Melrose Theatre, the Prince of Wales Theatre was an elegantly handsome theatre in the late-Edwardian style, with the large auditorium featuring an elaborately moulded balcony.

The Prince of Wales Theatre offered movie-goers a full orchestra and specialty acts presented by a resident troupe of vaudevillians. In 1929, with the presentation of Al Jolson in “The Jazz Singer”, it became the first theatre in Perth to install sound equipment (Western Electric).

Later, management decided that the theatre would only screen British films and it promoted itself as “Perth’s All British Theatre”.

Lavish foyer displays were a Prince of Wales Theatre’s trademark, and there was a strong focus on customer service. Possibly unique was the theatre’s refrigerator service. Shoppers could leave their perishables with the attendant, while they went in to enjoy the movie. The attendant was employed solely to operate the service and guard the refrigerator which was located in the foyer itself. With Perth’s scorching summer temperatures, this was a canny initiative on management’s part.

Regrettably, the Prince of Wales Theatre did not enjoy the lifespan it deserved. In 1935, just 13 years after its construction, it was demolished to make way for a new Bairds Department Store.

The site is now the Perth underground train station,and shops and offices(180 william?).

The Melrose Theatre also had a pictutre gardens(also called Melrose.

There is a picture of the Prince of Wales Theatre (unique?) refridgerator in the book Stage,screen and stars(page 29).

Hi David! Yes the ‘refridgerator’ pic is a classic!

I wonder if the refridgerator from the the Prince of Wales Theatre still exists anywhere?

The department store was Bairds. Name changed to Myer in December 1969. Myer moved up Murray Street to the old Boans Department store site in 1989. Then used as a music store(Trax) on the ground floor and the basment level on the Murray Street and William Street corner of the building. The rest of the ground floor(murray Street side) was a discount store(Red Dot or King Kong i think?). Building closed down in 2003 by worksafe due to the presense of asbestos. Partly demolished in 2003, or 2004 0r 2005. Part or the department store is still there at the Wellington Street end, now used as the offices of Western Australia’s State Heritage Office. A little bit of the Murray Street end of the building was used in the shops and offices there now, next to Perth Underground Train Station.