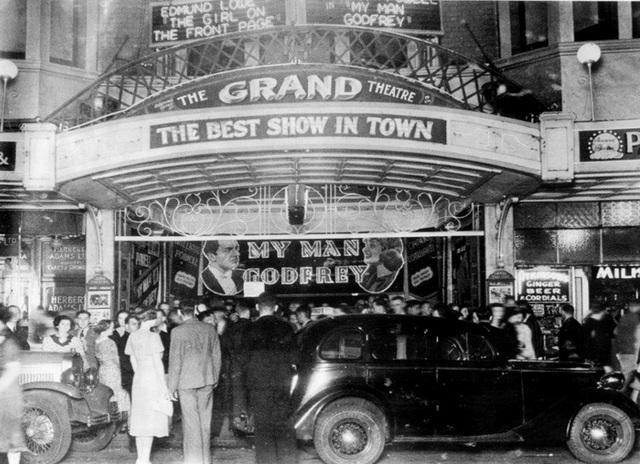 Built by entrepreneur Thomas Coombe, the Grand Theatre opened on 20th September 1916. It was designed by architect R.J. Denneby. Seating 1,100, with 842 in the stalls and 274 in the balcony, it had a windlass-operated sliding roof, like the more prestigious live theatres, and also shutters on the side walls which could be removed for ventilation like the semi-open-air theatres.

While initially independent, it soon became an an important part of the Greater Union Theatres chain. It was wired for sound in 1929 (and abandoned its orchestra), and in April-May 1932 became an all-British house, a showcase for the most prestigious of the British films.

During the difficult times of the Great Depression, the Grand Theatre was under threat and was saved by a new company, the Grand Theatre Co. Over the years, very little change was made in the façade of the Grand Theatre: brickwork was painted over, a neon sign added in the manner traditional to cinemas (down the length of the façade), and the ornate metal verandah replaced with one of cleaner, more modern lines.

Inside there was more change. The first major reconstruction took place in 1938 to the plans of architectural firm Baxter-Cox & Leighton, headed by architect William T. Leighton. The Grand Theatre became the first theatre in Australia entirely illuminated by neon lights. By the time of the second major renovation in 1959, the Grand Theatre Company had been transformed into City Theatres Pty. Ltd., in recognition of the wider activities of the company, though the management, in personnel and policy, had not substantially changed. This renovation was extensive.

The theatre ultimately closed in December 1982 following the opening of Cinema City nearby in 1980. The building became a pizza restaurant and was, regrettably, demolished in 1990.

Not only the site of the former Boans Department Store but also Padbury Building with many shops on Forrest Place and of course the Australia Hotel on Murray Street. A lot of people seem confused about Forrest Chase and think that is a street but it’s a shopping centre same as Galleria Shopping Centre, Morley. I’m not sure when that section of Murray Street between Barrack and William Streets became a mall but it was later than the same section in Hay Street. I remember the trams always travelled west in Hay Street and East in Murray Street before it was a mall.

I think that section of Murray Street became a mall(late in 1987? after the demolition of the Boans Department store and Padbury buildings and the Australia Hotel and a book store(Angus % Robertson) and a grocery store(i forget the name, i think owned by a former Lord Mayor of Perth?) in (1986?). There is still a Forrest Place(Forrest Chase is just the name for the shops on the eastern side of Forrest Place. Both Forrest Place and Forrezt Chase are listed on Wikipedia.

I think Angus and Robertson Book Store was where the Australia Hotel had been – not sure when that closed. I don’t remember a grocery store along that side of Murray Street. Charlie Carters was opposite next to Popes Butchers. Near the Grand Theatre there may have been a Woolworths. The stores that the former Lord Mayor of
Perth Sir Thomas Wardle owned were called Tom the Cheap – http://australianfoodtimeline.com.au/tom-the-cheap/

I think it might have been Tom the Cheap(grocery?) store that was on the north east corner of Murray Street and Forrest Place?

It could have been but I don’t remember it. I did leave Perth in 1959 and really didn’t return till 1969. As far as I can remember Michelides Tobacconist retail store was on that corner. Further East along Wellington Street closer to Barrack Street there was a John Wills grocery store. Tom the Cheap stores were all done on the cheap – low rent, basic shelving etc and about a 10% mark up. Even then rents in Perth city, I would think, would have been too high for one of those stores. I think at one time, however Tom Wardle bought the old Sandover site in Hay Street and opened that as Tom’s Other Store which suggests he may have had another store in Perth.

I do remember Wanambra Arcade and the movie theatres there and I remember the bookstore was called Alberts Bookshop. The downstairs bar when it was the Australia Hotel was called Davey Jones Locker and later Albert’s Tavern. When Angus and Robertson moved back to Murray Street as you say about opposite where it had been in the former Australia Hotel it was in what had been Charlie Carters Grocery Store.

That part of Forrest Chase is also City Central, the only shops open is a Woolworths suoermarket and a fashion or shoe store(i think?) on the 1st floor level and some offices on the other upper floors above.

JB HI-FI moved there store from the old Capri Theatrette building(closed on 7/5/2019) opening above the Woolworths supermarket where what used to be a Dick Smith electronics store and a Red Dot variety store on the old Grand Theatre site(opening on 8/5/2019).