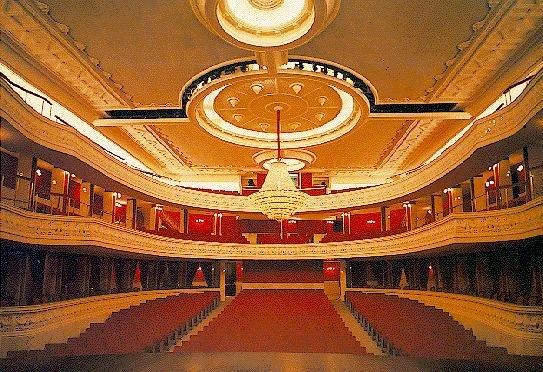 The Yaguez Theater was inaugurated in 1909 in the urban center of the town of Mayaguez. It was built by Mr. Francisco Maymon Palmer who was a local pioneer of the silent film industry. Even before silent films became popular in Puerto Rico Mr. Maymon would bring them from across the world and distributed them throughout the island. In Mayaguez he and his partners exhibited silent films in the old municipal theater until they built the Yaguez.

In 1919 there was a terrible fire which destroyed much of the Yaguez and took the lives of 150 people; however the theater was rebuilt to its former beauty in the baroque style. In 1976 the theater was declared a historic landmark (National Register: 85003086) and the fallowing year it was acquired by the municipal government of Mayaguez. The theater stands today as a performing arts center and the municipality’s main performing arts venue.

The article below appears in the 9/11 edtion of Caribbean Business. The Yaguez Theater, having been closed for 7 years for a major restoration is reopening just before celebrating its 100th anniversary! The text of which is below:

To be named after late actor Lucy Boscana; month-long celebration filled with artistic activities
Teatro YagÃ¼ez will reopen its doors tomorrow, after being close seven years for repairs. To celebrate the occasion, the Puerto Rico Symphony Orchestra will delight guests with a version of the same concert they performed 50 years ago on the very same stage.

The inaugural event will pay late homage to MayagÃ¼ez-born actor Lucy Boscana, by naming the theater after her to acknowledge her career and legacy. Also part of the celebration, 22 musical and theatrical performances are scheduled to go onstage and can be seen free of charge for everyoneâ€™s enjoyment.

â€œDuring our month of celebration, weâ€™ll have activities for all tastesâ€"theater, cinematography, concerts, etc. Since our municipalityâ€™s birthday coincides with the festivity, we will incorporate MayagÃ¼ezâ€™s 248th anniversary with YagÃ¼ezâ€™s reopening activities,â€ said MayagÃ¼ez Mayor JosÃ© Guillermo RodrÃ­guez.

The latest improvements to Teatro YagÃ¼ez, built in 1909, include fixtures, a glass dome, roof, seats and other architectonic elements, in addition to changes in the color palette.

After the Institute of Puerto Rican Culture designated it a National Historic Landmark, the municipality acquired the theater in 1977 and reinaugurated it in 1984. In 2001, the municipality closed theater again to undergo a delicate restoration process, the motive of tomorrowâ€™s celebration.

â€œI feel happy and satisfied with the results of this project, which ensures future generations can continue to enjoy this architectonic jewel and its music, cinematography and other artistic performances that will be held in it,â€ RodrÃ­guez said.

Bravo!!! to the the city of Mayaguez for the amazing renovation of this grand theater. The exterior and it’s details are spectacular. I didn’t think that I would be able to get a peek inside, but as luck would have it, they were about to have a spanish guitar competition and the lovely woman at the front door said it would be fine for me to go inside and have a quick look.

The auditorium and its chandelier are lovely and the horeshoe shaped balcony is classic. Again, the interior renvovations are top notch as well. Kudos to the city government of Mayaguez for a job well done! What a shame that San Juan was not able to save even one of their grand theaters in this manner.

I lived in Mayaguez for the better part of 5 years, on account of being a student at the College of Engineering (“El Colegio”). Saw a play there shortly after the 1984 renovation. Wonderful place. During the mid 80’s, it was used for live music events and theatre. I do not recall any films being shown there during that period. There was another movie theatre a few blocks from the main plaza. I believe it was called the Mayaguez. It’s probably demolished by now. At any rate, I’m glad that the Yaguez is still alive and kicking!

If you clic “Ver fotos” on this link of the Paramount in disrepair prior to reconstruction, you will see many PR projects. Scroll down and you will find a link to photos of the Teatro Yaguez and the University Theater.