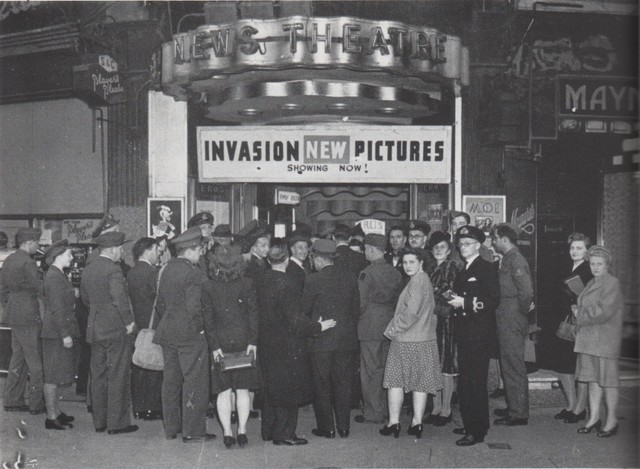 Located on the prime location corner of Shaftesbury Avenue and Piccadilly Circus in the Monaco Building, the Eros News Theatre opened on 20th August 1934. It was a tall narrow auditorium, located in a basement and had seating in a small circle which was one floor below street level and an orchestra stalls level another floor down. When entering the auditorium on both levels it was from behind the screen, and you had walk towards toward the rear wall to reach the better seats. The stairs down had decorative details in metalwork under the handrail depicting a man with a movie camera and the entire decorative treatment in an Art Deco style was worthy of a major Super Cinema.

The site was so tight on space that the projection booth was actually in the building next door (at street level, although when viewed from within the cinema it was at the rear of the circle) and could not be reached from the cinema.

It was operated by Capitol and Provincial News Theatres who also operated the news theatres at Waterloo and Victoria main line railway stations. This company later became the Classic Cinema chain and they operated the building throughout its life. When newsreel’s ceased to be produced in the late-1950’s it became the Classic Cartoon Cinema and entered the busiest (and most notorious) part of its cinematic life.

Busy due to its excellent location and the tiny paybox which sold sweets and cigarettes became the ‘local shop’ for passers-by. This brisk trade was also helped by the notorious reputation the cinema gained by becoming a favourite place for the local Piccadilly Circus ‘rent boys’ (male hustlers) who used the cinema as a pick-up and sex venue with their male clients. Of course being a cartoon cinema showing continuous one-hour long programmes from 10am until midnight (at cheap prices) mean’t multiple ticket sales/admissions were possible throughout each day, and sometimes this tiny 203 seater had more admissions and grossed the equivalent in money than its larger 2,000 seat mainstream neighbors screening regular films. ‘Action’ was confined to the rear stalls under the circle, so when families and children came in to see to cartoons, they were advised the ‘best seats were in the circle’ and were seated in that area, safely away from the ‘goings-on’ downstairs in the rear stalls. Eventually the local authority insisted on a clampdown and ordered the house lights being permanently on half dim and regular patrols were made of the auditorium. It all came to end in 1976 when the cartoon programmes ended in favour of feature films being shown, the cinema was re-named Eros Cinema and “Love in a Women’s Prison” plus “Sins Within the Family” began the ‘adult’ soft core porn era.

The exterior of the Eros Cinema is seen in the final sequence of the John Landis movie “An American Werewolf in London” (1981) and although there is also an interior sequence, that scene was filmed on a studio mock up set. The Eros Cinema closed for business on 14th February 1985 (Valentines Day get-it = Eros?) with the Bo Derek film “Bolero”.

The building was converted into a jewellers shop and in 2002, the interior was totally gutted and re-opened as a Gap clothing store. This was closed in 2020 and the space is vacant.

This place had a lot of character, that was for sure.

My favorite story is of the ‘bucket’ system.

The paybox was very small, and was directly below the managers office. There was a hatch built in to the floor, and a ladder so that in theory the cashier could climb out and into the office in case of any trouble.

However, it was never used in that way – someone had attatched a bucket on the end of a rope in the office, and when the cashier had collected a few quid, she would shout “Ere – send the bucket dahn!”, and you would lower the bucket down and collect the money to put in the safe.

The auditorium lights were always kept very bright when the films were on, to stop people from getting up to anything unsavoury – it was like daylight in there! Of course in places like this no one ever complained.

In fact the most common complaint was that the films were not actually hard core – the posters always promised much of course, but most of the films were basically like Carry On films with a bit more tit and bum. There was the occasional Russ Meyer season, which were at least watchable.

And it was not unheard of for films to be re titled 2 or 3 times and shown again under different names.

The staff were also an intersting collection of people…no names mentioned for obvious reasons, but think Addams Family and you will know where I am coming from :)

If you click on the Google maps function they have added numerous contemporary photos of the building to the photo that they took.

Here is a screen capture from the film “An American Werewolf in London”, and a contemporary view today:
View link

Ali, I was reading your post and at first I could not place you, but then when I read the bit about your romance with a staff member, it suddenly clicked.

Would this ladies initials be PF by any chance?

I think I do remember you now.

At the time you would have worked at Eros, I would have been based at the Classic Oxford street, working under George Park. He was a lovely old guy George. I know he passed away some years back, bless him.

I remember Stuart Hall very well, and I actually got on very well with him. We were both from the North of England, which I think helped. Wonder what he is up to now.

I remember JP Williams too…a rather fussy, strait-laced man as I recall. Didn’t have too many dealings with him, but we crossed swords on a couple of occasions.