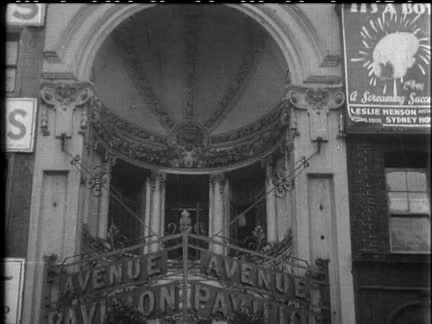 Located on Shaftesbury Avenue, in the heart of central London’s West End theatre district. The Shaftesbury Pavilion opened on 19th October 1912. It was one of the first of a small chain of ‘Pavilion’ cinemas built for and operated by Israel Davis in and around London. Seating was provided for 750, with 500 in the stalls and 250 in the circle. It was equipped with a large 2Manual pipe organ.

On 4th April 1927, the Davis family sold their chain of cinemas to the Gaumont British Theatres Ltd. circuit. Re-named the Avenue Pavilion, it then specialised in Continental films.

In 1930, it underwent a re-modelling to the plans of architectural firm Nicholas & Dixon-Spain. A new 2Manual Christie theatre organ replaced the original straight organ, and the seating capacity was reduced to 510 in stalls and circle levels. It re-opened on 18th August 1930 as the G.B. Movietone and News Theatre, the first newsreel theatre in the UK.

In 1938, the cinema was one of several Gaumont owned cinemas that participated in public demonstrations of the new Baird television system. It was re-named Gaumont News Theatre from 1st May 1939, and the programming now included a newsreel, short films and a serial. The cinema was closed for several weeks during 1940, due to wartime conditions, and it re-opened in November 1940. Unfortunately, it suffered severe damage by German bombs soon afterwards, and it never re-opened. The Christie organ was removed the damaged building in 1941, to be installed in the Plaza Cinema, Chorley, Lancashire. The building was further damaged by a German bombing raid on 17th April 1941, which totally destroyed the Shaftesbury Theatre (a live theatre), located directly opposite the former Gaumont News Theatre.

The bombed out remains were finally demolished in 1957/1958, and in February 1959, an office block named Wingate House was opened, that also contained the Columbia Cinema in its basement (today operating as the 3-screen Curzon Soho) which has its own page on Cinema Treasures.