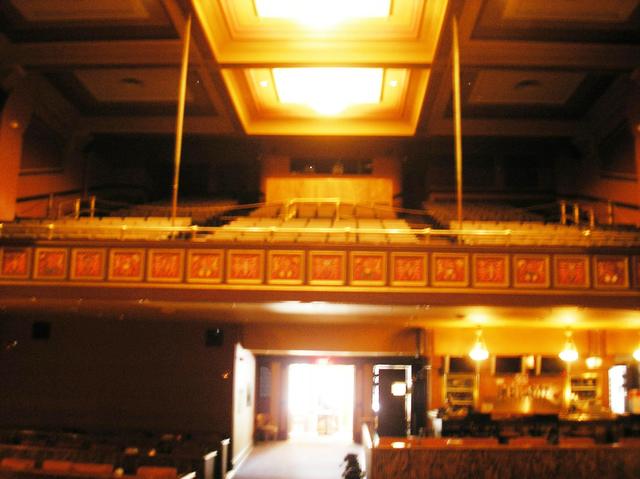 Built in 1915 - 1917. By 1941 it was operated by Paramount Pictures Inc. through their subsidiary Lucas & Jenkins. Open until 1975. First public building in Macon to have air conditioning.

Pie Hole and Tap House is managing operations. Their phone number for information is 478-318-7860. Web site is Capitoltheatremacon.com.

Given the sponsorship of the theater by a cable company, I can imagine that the daily feature starts sometime between 10 a.m. and 5 p.m.

As of the beginning of June, the theatre is programming independent films, musical shows, and mainstream films weekly. The restaurant management has changed. The theatre organ is still present and still being used when an organist is available. In April the first annual Macon GA Film and Video Festival (www.maconfilmfestival.com) was held and was very successful. It included concert performances and silent film screenings with the Grand Organ featuring international theatre organ star Ken Double. The theatre seems to be enlivening the downtown area and is an exciting place to be.

Here are a couple of recent photos of the Capitol Theatre. The Capitol is among the finest midsize theatres in the country. Well worth the trip from Atlanta or anywhere else in the northern hemisphere.

The Allen 317-EX organ, loaned by theatre organist John McCall has now been removed, but not before it was recorded by McCall in a new CD, “A Capitol Idea”. For information on the purchase of this recording, please contact John McCall at Also, a limited number of CD’s are available at the theatre.

The correct website address for the Capitol Theatre is now:

Look for it in John Huston’s 1979 film Wise Blood" which was filmed in Macon.

The September 16, 1916, issue of The Moving Picture World said that the new Capitol Theatre in Macon was scheduled to open on October 2. They missed the deadline, though, as the theater’s official web site says that it opened on November 10. Here’s the complete item from MPW:

“Macon, Ga.—R. H. DeBruler, formerly of Atlanta, will be manager of the Capitol, the new moving picture house at Macon, Ga., which is under construction, and will throw its doors open to the public on October 2.

“The house is owned by Troup Howard, R. C. Hazelhurst and Brown Wimberly, of Macon. When completed it will have cost about $60,000. It will seat 1,000 people and will have main floor and a balcony, and boxes on the side, with an orchestra of five. Only first run pictures will be shown.”

The Capitol was a an extremely popular theatre in the 50’s and 60’s with a grand marquee, “Love Me Tender”, Elvis' first movie had it’s Macon premeir at the Capitol. I am so glad they restored it, however they made changes and reconfigurations inside and of course the fabalous marquee is gone, but most of the original was saved, way to go Macon.

That’s what I’m talking about, great photo of the marquee and the Capitol, what a treasure and resource, the boxoffice publication.