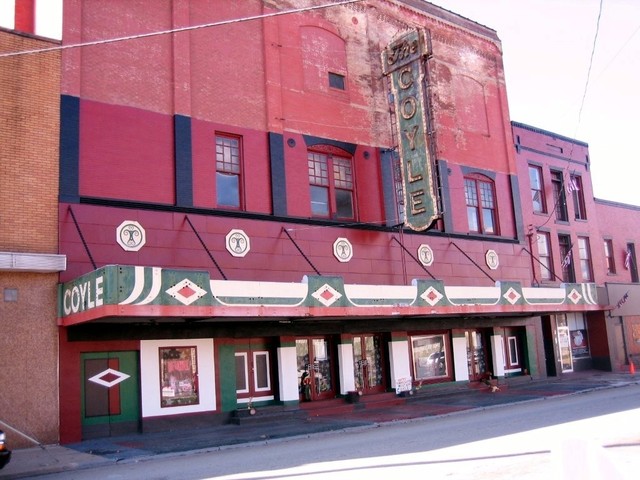 It was a quaint little theatre where you went in the Monongahela Valley to see a movie if you didn’t feel like driving 25 miles to the nearest larger theatres in Greensburg, Uniontown or West Mifflin. Opened as the Opera House on September 14, 1892 with a play titled “Killarney and the Rhine”. It was renamed Coyle Theatre by 1920. Alterations were made in 1922 and again in 1934. It was restored and reopened in the 1980’s but was later closed.

There is currently a crusade underway to help restore the theatre by the Mid Mon Valley Cultural Trust. First they must raise $65,000 to own the building and then anticipate a cost of at least $2 million to restore it. They would like to have live shows and movies take place there as well as have a community cultural center.

It was announced in July 2019 that demolition is planned for the Coyle Theatre. Demolition happened in November 2019.

The Coyle Theatre was listed in various editions of Julius Cahn’s guide from the 1890s through the 1910s as a second floor house. The alterations in the 1920s must have been virtually a complete rebuilding to turn it into a modern movie theater.

The house apparently underwent additional alterations in 1934. An item in the April 8 issue of The Film Daily said, under the heading “Coyle Theater Enlarged” that “R. S. Coyle’s theater here is now called the New Coyle, with seating capacity increased to 999.”

Robert Coyle was still operating the house at least as late as 1945, when the July 16 issue of Motion Picture Daily mentioned him as the “…oldest Paramount exhibitor in this territory.”

New Mid Mon Valley Cultural Trust is in place as of June 2014 with renewed efforts to restore this historic Coyle Theater in our Mid Mon Valley! Visit us on facebook(The Official MMVCT site)for daily updates of our progress and how you can get involved with this important restoration and renovation of an American Icon in our midst. This can only be done with community support, involvement and participation. Together we CAN make this happen —– help us bring back some ‘magic’ to the Mon Valley. Contact us at MMVCT, 335 McKean Avenue, Charleroi, PA 15022.

The Coyle was definitely in business well before 1922. A relative was working as a pianist at the Coyle Theater at the time of his death in 1920. He died November 6, 1920.

New photos added .I spoke with a few local residents last weekend who told me they knew the roof had been repaired but have seen no work done on the building for quite some time.Can anyone with FOTC check in with an update ?

According to a post from Theatre Architecture on Facebook, the theatre will be demolished.
“It is with great sadness that I announce the impending demolition of the Coyle theater in Charleroi Pennsylvania, near Pittsburgh due to a lack of vision by city officials. This is the last theater in the Mon- Valley soon to be gone forever"😥

The calendar of the previous year’s theatrical events in the 1893 edition of The New York Clipper Annual said that the Opera House in Charleroi, Pennsylvania was dedicated on September 14, 1892. A play called “Killarney and the Rhine” was the first presentation.

Looks like the end of the line for this one sadly. https://observer-reporter.com/news/localnews/coyle-theater-demolition-permit-issued-in-charleroi/article_6e2f49f4-c370-11e9-9cfa-670f6073b68e.html?