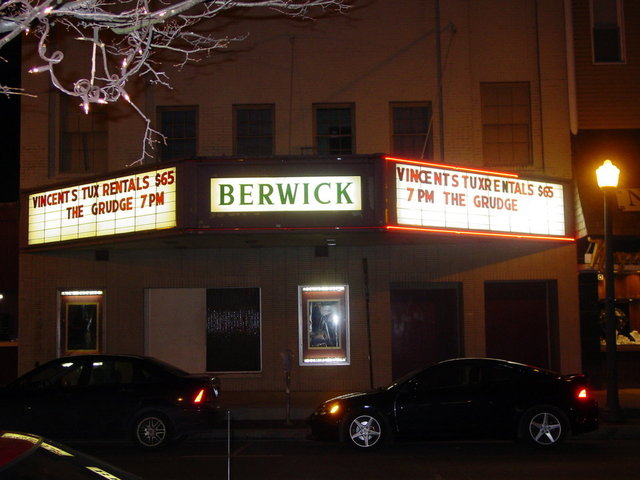 I don’t know anything about the history of this theatre except that it is an old downtown theatre. It was originally operating as the Opera House by 1914, and was operating as the Strand Theatre from at least 1926 when it had 1,000 seats. The Strand Theatre suffered damage from a fire on September 23, 1933. It was later reopened and by 1950 had been renamed Berwick Theatre, operated by William Goldman Theaters Inc. It operated thru to at least 1957 with a seating capacity of 800. it’s in good shape, medium sized, long and narrow, sloped floor, balcony, a few Art Deco style architectural features, fun to go there and watch movies.

I brought my kid to see “Shark Boy and Lava Girl” in 3D. The place was full of kids. I felt like I was in a time warp. They should show “The Creature From The Black Lagoon” in 3D. I bet the Berwick crowd would appreciate it.—–Maybe someone who knows more about the history of this theatre could add something.

The Strand/Berwick is located at the same address that was listed for the P.O.S.of A. Opera House in a 1905 city directory. This was a theater built in 1890 by the Patriotic Order Sons of America. The P.O.S. of A. Opera House, according to various editions of Julius Cahn’s guide, was a ground floor theater seating about 650. Unless the original building was destroyed, the Strand/Berwick Theatre must be the same house. The facade of the Berwick in the photos linked above does look fairly old, though it also looks rather plain for a theater built in 1890, so it might have been remodeled at some point.

During the 1910s, Berwick had houses called the Palace Theatre, mentioned in a book published in 1915, and the Lyric Theatre, mentioned in a 1913 magazine article as having been recently remodeled. I haven’t found any references to the Opera House later than 1908, so either the Palace or the Lyric (or both) might have been the Opera House renamed, and thus an aka for the Berwick, but I’ve been unable to connect either name with an address.

Good day ! My name is Aaron Daniels and I live in Northern Virginia. My grandfather was Joseph Lee. He owned the Strand in Berwick for a number of years. He also owned the drive-in located between Berwick and Bloomsberg, the theater on Bloomsberg itself and at least one additional theater in Wilkes-Barre/Scranton. I believe he owned the Strand between approximately 1965 and 1971 when he became ill (he passed away in the summer of 1972). I also believe he “lost” the theater when 1.) he couldn’t get the first run movies from the distributors and 2.) he overextended himself financially with the big renovation hilighted in the box office article referenced above. His family ran theaters in Cinncinatti since the earliest days of film. I would love to know more about this or any other theater my grandfather was associated with, especially pictures.

Growing up in this movie theater (I’m only 22), I’ve come to know some of the history (as told by grandfather). I was under the impression that the theater was the Palace Theater initially and then the Strand movie theater. One was performing arts and the other was film. There was a fire in the movie theater in the late 30’s. I think thats when it was solely the Strand movie theater. In the 70’s, I believe there was major renovations to it in which the BIG screen was added. I also think that was when the lot that used to be empty was expanded and that’s how we ended up with the lobby. I know that the lobby wasn’t always there. It was in the middle under the marquee. That’s why it looks so strange, to those who are used to seeing a typical vintage movie theater entrance.

I hope that helps!

I’m also on here to find out how I can track down old/vintage movies to play. It’s a popular request among our customers and I’m having a hard tine getting my hands on them!

The Berwick Theater is now faced with the task of switching to digital format. They are running a crowdfunding campaign to try to raise the necessary funds to do so. http://www.indiegogo.com/projects/the-berwick-theater-must-go-digital-or-go-dark/x/3071683

The Berwick Theatre is scheduled to be featured on an upcoming episode of the new Fox Business Network show “Strange Inheritances”. The episode is currently scheduled for Monday March 16, 2015 at 9:00PM ET.

Not exactly sure why they consider inheriting a movie theatre to be strange.

The show is running now, and worth catching.

A report of the September 23, 1933, fire that destroyed the Strand Theatre in Berwick appeared in the September 25 issue of The Kane Republican from Kane, Pennsylvania. The article said that the building was owned by the P.O.S. of A., so it could well have been the old Opera House with a new name.

The article also said that nearby buildings suffering damage from water and smoke included the Palace Theatre, so the Palace and the Strand were different houses very close together, possibly adjacent. The Strand was back in operation by 1935, but I don’t know if it was a new theater on the old site or if the name Strand had simply been moved to the nearby Palace Theatre.

I’ve found two notices of theater construction in Berwick, one in 1916 and one in 1919. No theater names were attached to either item, but one of them might have been the Temple Theatre, in operation in 1943 and located on W. Front Street.

I saw tonight on TV this theater featured in a show called Strange Inheritance. Owner inherited the theater from her grandfather but to make the digital conversion & other repairs, went nonprofit.episode 17 http://www.strangeinheritance.com/episodeguide

That Strange Inheritance show was on again, and it was chock-full of info about this theater.

The sketchy introduction on this page needs to be rewritten with some facts and respect.

I just saw the TV show mentioned “Strange Inheritance” and at the end was a “In Memoriam” card for Renee, the grand-daughter who kept the theatre alive. She passed away December 29, 2018 at age 27. https://www.pahomepage.com/news/remembering-renee-fulfilling-her-grandfathers-dying-wish-to-save-the-berwick-theater/