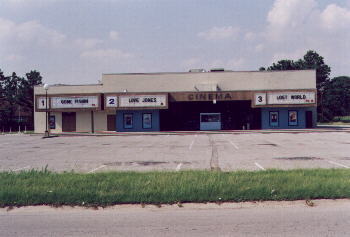 Opened May 30, 1975 as a twin theatre under Charlotte based Stewart & Everett. The Brynn Marr 1 & 2 was located in the Brynn Marr Shopping Center on Village Drive at Western Boulevard. Each screen had 300 seats. The opening day movie was “The Prisoner of Second Avenue” with Jack Lemmon and Anne Bancroft and “The Four Musketeers” with Oliver Reed. Stewart & Everett operated the theatre well into the 1970’s when they added a third screen which had 150 seats. It was renamed Brynn Marr 1-2-3. Carmike Cinemas took over upon its acquisition of Stewart & Everett in 1986, and it was renamed Carmike Brynn Marr 3. It continued screening first run movies until it had stiff competition from the newer state of the art Carmike Cinema 7 which opened in 1989.

From the mid-to late-1990’s it became Jacksonville’s top notch cinema and switched to screening second run discount movies at bargain prices to stay afloat. The Carmike closed the Carmike Brynn Marr 3 June 26, 2003. The building is now a church

Opened in 1975 and was operated by the Stewart and Everett Theatre chain as a twin cinema.
Known as the Brynn Marr 1 & 2.
The opening features were “The Prisoner of Second Avenue” with Jack Lemmon that played in screen one while screen two shown “The Four Musketeers” with Charlton Heston and Richard Chamberlain.

As an aside, “The Four Musketeers” was actually filmed the same time as “The Three Musketeers”, a year or so earlier. Apparently the length of the initial project, prompted the studio to cut and release it as two films instead. I read where a lawsuit was filed by the actors, as they were initially paid for only the first film. They supposedly won and were later compensated for the second film.

The Playboy Theatre in Chicago ran both films together during some of their midnight double features in the `70’s. Yesterday would have been Oliver Reed’s 71st birthday. A star on both Musketeer films.

Running two completely different themed films at the Brynn Marr for their grand opening, made good business sense as to appeal to a wider audience.

Great ad and Added Stories on the Twin,looked liked a nice place to work.

The address is 49 Village Rd. Western Blvd runs along next to it but it fronts to village road. I passed this former cinema today. It is currently a church.

Brynn Marr opened in 1975 as a twin cinema operated by Charlotte based Stewart and Everett Theatres. By 1986,Carmike Cinemas took over the operations of the Brynn Marr(when it was still a twin cinema),and around that time construction began on a third auditorium. What they did was take the auditorium in Screen 1 and split in down the middle,adding shoebox size auditoriums with smaller screens,making it a three screen cinema. The Brynn Marr continue onward during the late-1980’s and early 1990’s showing first-run films. By the mid-1990’s it became Jacksonville’s only discount movie house,showing second run films at bargain prices.
It remained that way,until the cinema’s closing in June of 2003 when it was last operated by Carmike Cinemas.

I wonder if Jax even has a dollar house anymore?

Jacksonville has only one civilian theater currently, the Carmike 16. When it opened, the Brynn Marr, the Carmike 7 in New Market Square, and the Cinema 6 (a former Stewart & Everett theater identical to the Havelock Cinema 6) were all closed. To the best of my knowledge, the only discount theater east of Raleigh is the Howell Theater in Smithfield.

“Beverly Hills Cop” with Eddie Murphy played here first-run On December 5,1984 when it was the Brynn-Marr Cinema 1 & 2 under Stewart and Everett.