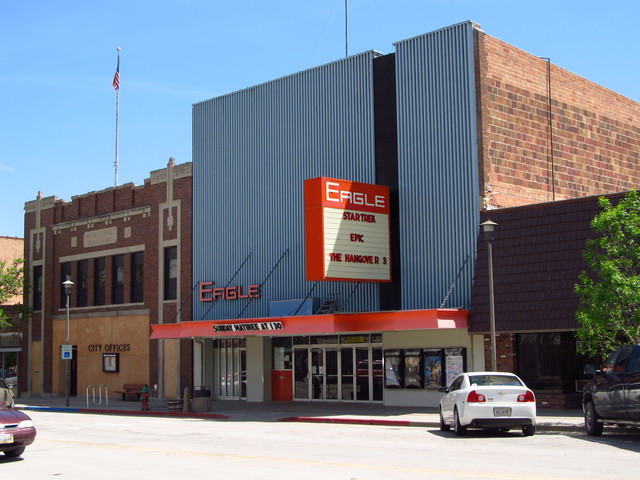 Opened as the Pace Theater on January 14, 1925 with Milton Sills in “The Sea Hawk”. It was equipped with a Wurlitzer theatre organ. On September 27, 1967 it was renamed Eagle Theater. Advertising stadium seating and first run movies, it has since been quadded.

Hi,
I’m Mike Walker and I’m writing a book about classic operating movie theaters in the Midwest, called Cinemental Journeys. There is a nice picture of the Eagle theater here and we’d love to have permission to use it. Our goal is to help preserve movie theaters, and we plan to sell the book on consignment at theaters, letting them keep a significant portion of the profits. If you have a movie memory you would like to share, you can do so at www.moonbookstore.com
Thank you,
Mike Walker

There are in fact four screens at this theater. There is a main theater with a large screen and three smaller ones. Two located upstairs and to the right (south) and left (north) of the main screen located below. The fourth is located to the left (south) of the main screen, but on the same level. I’m from Crawford Nebraska and have grown up in this area. I’ve been there in the last week. If you have any questions or need anymore info. email me at
Justin Bosak

Here is a picture postcard of downtown Chadron with the EAGLE THEATER visible on the left side of the street. Bird on a Wire and Cadillac Man were showing which dates the post card very closely to 1990.

Looks like the EAGLE has has had a re-do and lost quiet a bit of character.

I am from Chadron and the Eagle Theater was previously an opera house. It has 4 screens and shows all new movies. The theater is said to be haunted and a local photographer has actualy recently captured photos of figures inside the theater. They are posted currently at www.chadrad.com, our local news website. I am not sure what year the opera house closed down but if you contact the current owner I am sure he would tell you everything there is to know about the building he is a very friendly guy.

I suspect some of us that have a warm spot in our hearts for the old theaters would agree that they sometimes took on a life of their own because they were so much a part of our lives. Naturally after life comes death and I believe at times a resident spirit would remain. However I am not convinced by the small photo on the above mentioned website that a spirit image has been captured. I would love to see a large scan of it.

Without a doubt….“the truth is out there”

From 2010 a photo image of the Eagle Theater in Chadron.

The new location was announced in 1923 with architectural plans by E.B. Watson of Norfolk. The theatre finally launched on January 14, 1925 with “The Sea Hawk” and a musical concert on the mighty Wurlitzer organ from Kanas City costing $10,000. In 1929, the Pace added sound to stay relevant. And in 1930, James' son, Clyde Pace, was sent to manage the new Pace in Gordon.

Black Hills Amusement took over the theatre with Ted Jastroff managing. A major overhaul led the theatre to its final stage as the Eagle Theatre beginning on September 27, 1967 with “The Dirty Dozen.” Commonwealth Theatre Circuit took on the venue. Craig and Janine Bullard took on the single-screen venue in 1986 adding one screen each in 1989 and 1992 in the balcony and then purchasing the neighboring insurance building to add the fourth screen in 1997.