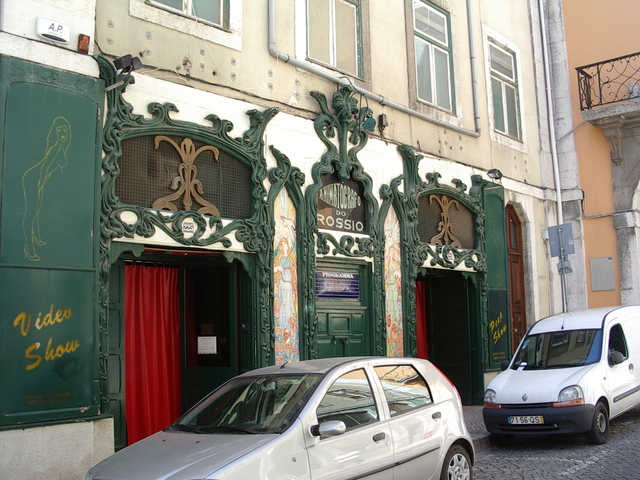 Located in a quiet back street just off the principle Rossio Square (Praca do Rossio), this must be Lisbon’s earliest surviving cinema.

It opened on 8th December 1907 by brothers Ernesto Cardoso Correia and Joaquim Correia Cardoso, it has remained unaltered since then. Basically a store front conversion, there is little decoration within the single floor auditorium which has 12 rows of seats and a screen mounted on the back wall.

The beautiful facade is adorned with a highly detailed Art Nouveau style, which consists of Azulejos tiled panels by M. Queriol and Jorge Pinto which depict Edwardian styled females surrounded by fruits and flowers. There is a central paybox on the street and an entrance door to the right and an exit door on its left. Once entering the cinema, there are curtains on the inside of the doors and you are directly inside the auditorium, as there is no foyer space.

It later became a childrens theatre and then a regular live theatre. Since at least 1990, the Animatografo du Rossio cinema has been in use as an ‘adult’ cinema screening sexploitation movies.

Any further information on its history or up to date status would be appreciated.

A recent exterior photo, unfortunately you can only barely make out details on the two tiled panels located each side of the central pay-box.
View link