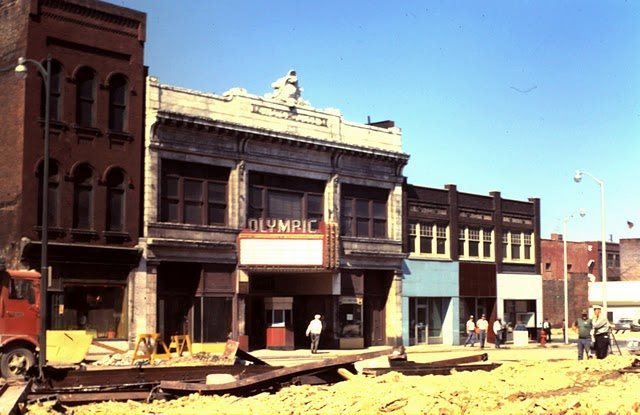 Anast N. Notopoulos built and opened the Olympic Theater in Altoona, PA., and it opened on June 3, 1915 with Betty Nanson in “A Woman’s Resurrection”. It was closed in the 1960’s.

Listed in the 1950 edition of the Film Daily Yearbook with a seating capacity of 1,191 seats.

My Life At the Movies: Tales of the Olympic
A folk singer from the ‘70’s once lamented: “They paved paradise
and put up a parking lot.” I can’t help but think how true that is
every time I stroll past the former site of the Olympic theater in
my home town of Altoona, Pa. It’s now a barren expanse of zig zag
yellow lines; a desolate and impersonal place, not a trace of it's
previous existance left behind.

The Olympic was built in 1914 and occupied the site of the
Elenenth Avenue Opera House, which burned down several years earlier. It was owned and operated by Anast N. Natopolis, a local
buisnessman who owned a number of theaters across the state. The
lowly theater aspired to high standards and promised “only the
best pictures obtainable” which must be “clean and wholsome,
affording the greatest pleasure possible.” During WWII, war bonds
were sold at the box office,and each purchaser received two free
passes to either the Olympic or the Capitol, which was also owned
by Mr. Natopolis. During the 1950’s a Saturday kiddies was held,
which included four cartoons and a feature for the amazing sum of
25 cents!! During intermission, the house lights would come up and
a small grey drum would be wheeled on stage containing all the
ticket stubs sold for that particular show. Several winners would
be chosen and the lucky ticket holders were given passes to a
future show. The late 50’s saw a great number of “B” horror flicks
play there, including House On Haunted Hill, which was one of my
favorites. Towards the end of the film, a skelaten would emerge from
behind a black curtin and fly on an invisible wire above the audience
and up to the balcony. More funny than scary, the flying bones got
pelted with paper cups and anything else the balcony crew could
find. I got many a good shot in myself as I sat through multiple
shows of this and many other of my favorite features.

By the late 60’s, things were changing for the movie industry
as well as for Altoona. As part of a redevelopment program, the
entire block between 11th and 12th Streets was knocked down to make
room for a new office building and an elderly housing project. The physical traces of the Olympic have been erased , but the
happy memories of the time spent there left an indellible im-
pression in my memory that will remain forever.

According to the above post, the Olympic has been razed. Here is a December 1968 ad from the Altoona Mirror:
http://tinyurl.com/ydazqoq

A 1950s photo showing the Olympic Theater, along with the nearby Logan Theater, can be found at http://goo.gl/aAz1J

Also, the Olympic Theater was not in the Juniata section of the city, but simply at 1104 11th Avenue (in zip code 16601, if it were still standing).

Several construction trade journals from late 1914 indicate that the theater being built on Eleventh Avenue in Altoona for A. Notopoulos had been designed by the Altoona architectural firm of Shollar & Hersh. Frederick James Shollar and Frank Austin Hersh were among Altoona’s most successful architects during the first third of the twentieth century.