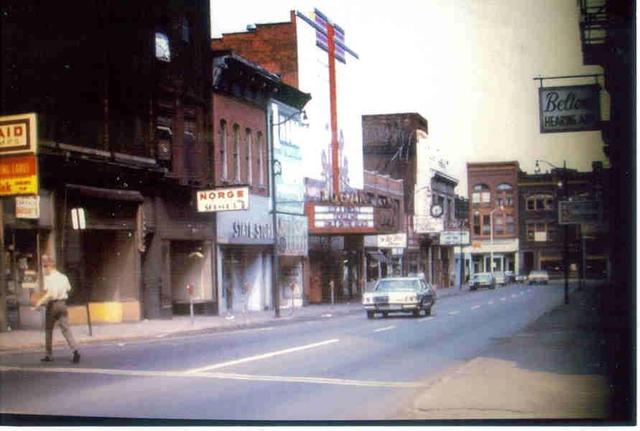 Here is an item from Boxoffice magazine, June 1962:

Brothers Jake and Ike Silverman, both in their 80s, reopened their Logan Theater in Altoona with Ike’s son as manager. On the screen was “The Gold Rush”, a Charlie Chaplin silent film with sound and music added. The Logan had been dark for a decade until last year when it was leased for art policy operation, but this failed.

The Logan might be the theater described in an item published by Boxoffice Magazine on July 17, 1937, which said that Jacob and Isaac Silverman were building two new theaters in Pennsylvania: a 750 seat house in Hollidaysburg, and a two-story theatre 50'x120' in Altoona. Victor A. Rigaumont was the architect of both houses.

The Silverman Brothers were already operating a theater in Altoona called the Strand. I’ll poke around and see if I can find anything else about any of these theaters.

OK, the Logan was indeed the Rigaumont-designed house in Altoona, and had been re-scheduled for a grand opening on January 10, 1938, according to the December 25, 1937, issue of Boxoffice. Apparently there were more delays, because the February 12, 1938, issue of Boxoffice said that the Logan had opened “last week.”

The Hollidaysburg theater Rigaumont also designed was the Blair.

I’m going to put this here so it won’t get lost. Isaac “Ike” Silverman was Altoona’s first theater operator. He opened the Pastime Theatre as a nickelodeon in 1906, and eventually expanded it to 500 seats. Silverman opened the new Strand Theatre on the same block in 1916, and the Pastime was closed a year later and its building converted to retail use.

Boxoffice Magazine published an item in its August 21, 1937, issue saying that the Pastime Theatre building was being demolished. No address or street name was given for either theater in the Boxoffice article, but I’ve seen possibly reliable claims that the Strand (and thus the Pastime as well) was on 11th Avenue. If anybody can dig up addresses feel free to submit either or both theaters to Cinema Treasures.

Other Altoona theatres currently not listed on CT as of March 2009, which were operating in 1950 were:
Juniata Theatre with 488 seats (no address given)
Lyric Theatre, 614 4th Street with 456 seats
Rivoli Theatre, Logan & Baker Boulevard with 652 seats
Sky-2 Theatre, 1127 8th Avenue with 337 seats

I came across a couple of PDF files at Pennsylvania State University’s digital library. One is a 1949 booklet from Altoona’s centennial, and it mentions in passing that, at that time, Altoona had ten theaters and movie houses. It doesn’t give their names, though.

The other PDF includes a 1922 ad for the Strand in it, so I’m going to comment about it on the Strand’s page.

Is this theatre still standing?

This photo appears to have been taken during a time when the theater was closed.

CSWalczak: A wonderful photo! Is this theatre still standing?

The address of the Logan Theater as given at the top of the page is not correct. Placing old locations in Altoona can be confusing in that the Juniata section of the city was once its own borough and had its own numbered streets — using many of the same numbers as those in Altoona. Juniata was annexed to Altoona in the 1910s or so, but kept the same street numbers. Consequently, 1116 11th Avenue was a correct address for two completely different locations. (The “North” was added to Juniata numbered streets in the 1990s.) In this case, the Logan was at 1116 11th Avenue.

A photo of the Logan Theater (also showing its neighbor, the Olympic Theater) can be found at http://goo.gl/aAz1J

Except for the Playhouse, all of the downtown Altoona movie theaters were gone by 1980, demolished in urban renewal projects.