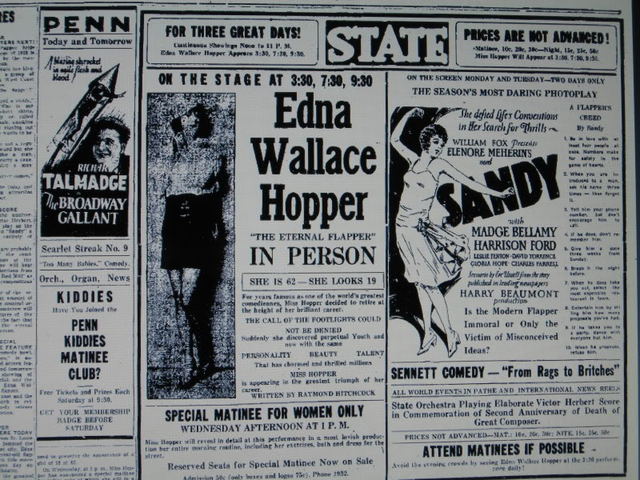 Located on 11th Street between 11th Avenue and 12th Avenue. This originally opened as the Orpheum Theatre on March 9, 1908. Previously the site had held Louis Plack’s Theatre and the Lyric Theatre which had both burnt down in quick succession. The Orpheum Theatre was operated by Wilmer & Vincent Corp. and presented Keith vaudeville. It became the Embassy Theatre on September 12, 1927 when Billie Dove in “The Stolen Bride” was the first movie to be screened there. It became the Penn Theatre from October 17, 1933 presenting vaudeville and later going over to burlesque. Movies were then added into the programming..

The Penn Theatre was closed on September 30, 1942. It was demolished in August/September 1951.

Demolition of the Penn:
http://tinyurl.com/oxnhq

ALTOONA, Pa.-The Penn Theater property and the entire business block has been purchased by A.N. Notopolous, local circuit operator. The theater has been under lease and has been operated for the past year by Notopolous and Wilmer & Vincent Corp., the operating company being known as the Elst Theater Corp. (named for Eleventh Street). Penn Theater will undergo extensive renovation in the spring.

The Orpheum Theatre in Altoona was built in 1908, but the site already had a theatrical history, noted in a 1990 publication about Altoona, Railroad City, from the National Park Service (Internet Archive scan):

“In 1887 Louis Plack built the Mountain City Theatre, a four-story brick building, on the corner of 11th Street and 12th Avenue; it burned in 1889 and was rebuilt as the Phoenix Block, an office building. In 1906 the building was converted back into a theater and reopened as the Lyric, managed by the Keith Vaudeville Company. Destroyed by fire in 1907, the theater was again rebuilt and subsequently named the Embassy, Penn, and Orpheum.”

Although this item in the March 7, 1908, issue of Variety doesn’t mention the name Orpheum, many later references indicate that the Orpheum was the Wilmer & Vincent house in Altoona until at least 1914:

“When the new vaudeville theatre opens at Altoona, Pa., on Monday, March 9th, it will be considered as one of the Wilmer & Vincent chain. The firm has been booking the attractions for the house. Under some arrangement entered into, Wilmer & Vincent hold an interest in the theatre, as well as Henry B. Harris, and others.”The house was known as the Embassy Theatre by 1927, and most likely retained that name until becoming the Penn in 1933. The Penn Theatre was demolished in 1951.

This page at GenDisasters has a photo of the burned out Lyric Theatre, the Orpheum’s predecessor. I don’t know if any part of the Lyric building was incorporated into the Orpheum’s construction.

The new Lyric Theatre launched here on October 22, 1906 with Keith vaudeville. It was built on the site of Louis Plack’s Theatre which had opened in February of 1888 by was destroyed by fire just one year after its launch on March 5, 1889. Unfortunately, the Lyric had even less success. A fire gutted the structure after just its fourth month of operation on February 24, 1907. The theatre’s foundation and possibly a bit more was used by the Silverman Brothers and Plack who rebuilt the theatre for a third time. They sold the project to Wilmer & Vincent - which may have changed the site’s luck for the better - which (re-)opened it as the Orpheum Theatre on March 9, 1908 again with Keith vaudeville.

Motion pictures were where the money was in the 1920s and on September 12, 1927, the Orpheum gave way to the Embassy Theatre with first-run First National Picture films. The opening title was “The Stolen Bride” with Billie Dove. The Warner Bros. Circuit took on the Strand creating the Warner Theatre there and that ended the Embassy’s movie run. It stumbled into the Depression with an assortment of live plays and burlesque.

Louis J. Alleman took on the venue renaming it as the Penn Theatre on October 17, 1933 and going back to its Orpheum roots with nine acts of “first class” live vaudeville. It would also stage lower tier burley shows. The theatre gradually began to reduce vaudeville and burlesque moving more to second-run, double-feature showing of motion pictures. In 1938, A. Notopoulous and Publix Theatres purchased the property ending its movie run on September 30, 1942. It was then used for sporadic political speeches, rallies and War Bond drives during World War II. After the War, it appears to have gone dark. Demolition of the Penn Theatre for parking took place August and September of 1951.