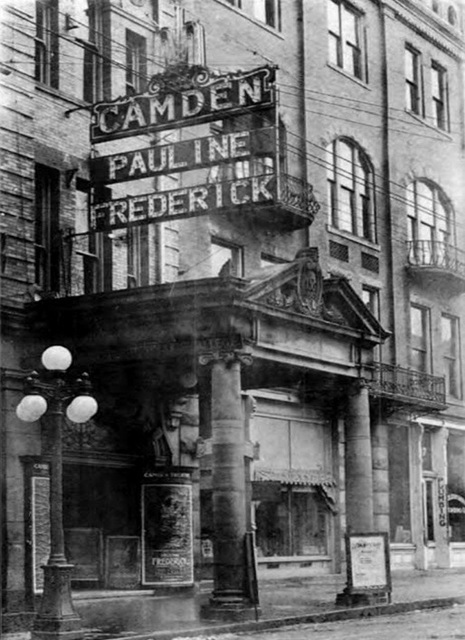 The Camden Theater was opened as an opera house on September 10, 1902. It began showing movies in the 1910’s. The Camden Theater burned down in 1929. Today, the Parkersburg Art Center is located on the site of this former theater.

An article about Fayette C. Smoot, operator of the Camden, in the March 8, 1919, issue of The Moving Picture World says that “[t]he Camden Theatre is 7 years old.” That would have meant a 1912 opening, but it must have been a mistake. The Camden is listed (and recognizably described) in the 1906-1907 edition of Julius Cahn’s guide.

Here is an article from Parkersburg 1907; a souvenir of the city of Parkersburg …this should provide some historical perspective along with the Smoot article. ( My Great Grandfather worked with Smoot and Managed the theater ) Interesting in that the article mentions the Theater as being almost fire proof.

Not sure my original post went through, so I apologize if this is a repeat. I was googling the Camden theater, and was happily surprised to find this website. My Great Grandfather (William E Kemery) was the owner. I love the pictures and article of the theater. If anyone has any memorabilia or old photos I would be interested in purchasing them or copies. I have subscribed to this page and will check back here for comments.

In my previous post I made an error My Great Grandfather was not the Owner, He was the Manager.