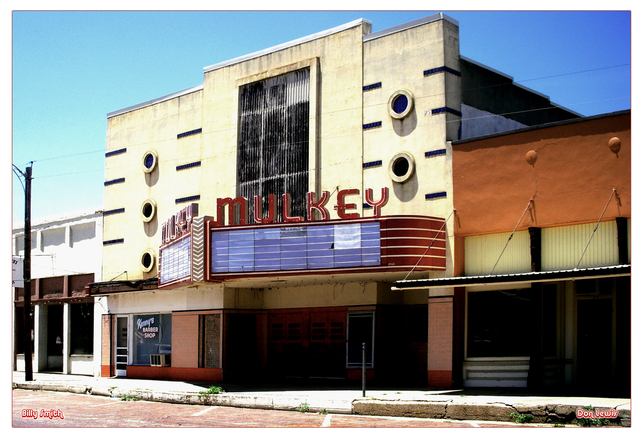 The Cozy Theatre was destroyed by a fire and was rebuilt, reopening as the Mulkey Theatre on February 13, 1946. It was named after Homer Mulkey, a pioneer photographer based in Clarendon. It was closed in 1986. When I last saw the Mulkey Theatre in 1988 it stood closed and lonely. It had a wonderful double sided marquee that extended out from the building and and formed a point. On top of the marquee “Mulkey” was spelled out in individual dark red letters that were outlined with neon tubing. The front of the building had pink and red tile.

It was purchased by Clarendon ECD in 2008 and work began on a $1million restoration. It reopened on May 25, 2019 with John Wayne & Claudette Colbert in “Without Reservations”(1946) and the South Plains Jazz Orchestra from Levelland playing tunes from the 1940’s on the stage.

Does anyone know the root of the Mulkey name? It’s the only one with that name in the database.

A 1988 photo of the Mulkey in Clarendon.

From 2010 a view of the Mulkey in Clarendon Here and Here.

From 2010 photos of the Mulkey Theatre in Clarendon. [Click on thumbnails for larger view].

According to this article about efforts to restore the Mulkey, the theater opened in 1946 as a rebuilt version of an earlier theater on the site, the Cozy, which was destroyed by fire: View link. The theater was named for a Mr. Homer Mulkey by his widow; Mr. Mulkey operated theaters in the Clarendon area.

Some history and plans for restoration here.

From 2010 a photo of the Mulkey Theatre in Clarendon.