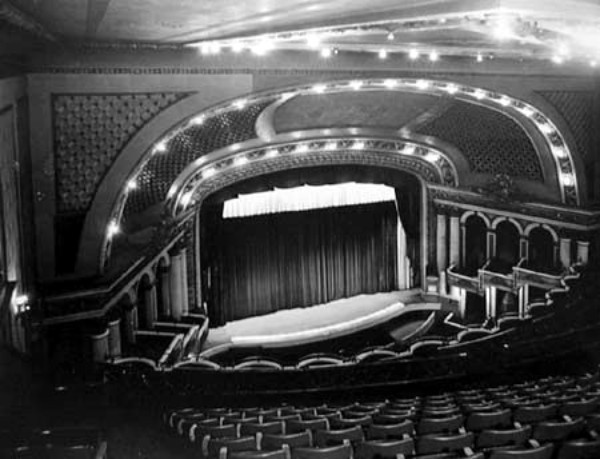 Designed by architectural firm Rapp & Rapp out of Chicago. Opened in 1915 as a vaudeville theatre known as Empress Theatre. Later converted to motion pictures and was later named RKO Keith’s Theatre and finally Keith’s Theatre. It was one of the ultimates in theatre palaces. With its elaborate interior design, side boxes, huge proscenium, large balcony and plush lobbies. It was a real eye catcher. The Keith’s Theatre closed in 1962 and was later demolished.

Could this be an early Rapp and Rapp design? I have found the following article in the Rockford Morning Star for Sunday, February 31, 1915 which states the following in an article heralding the opening of the Palace Theatre in Rockford, Illinois: (note the end)

“…Messrs. George and C. L. Rapp have specialized in theater designing and among their latest masterpieces at the New Oprheum in Champaign, the Orpheum in Quincy, the Columbia in Davenport, Ia., the New Palace in Fort Wayne, Ind., the Hippodrome in Chicago, the Ringling Theatre in Baraboo, Wis., and the Palace in Rockford. They also have theaters under construction in Louisville, Ky. and Grand Rapids, Mich.”

This house would not have opened in 1914 as RKO Keith’s, as the name RKO (Radio-Keith-Orpheum) wouldn’t come into existence until 1928. A 1915 photo published in “Grand Rapids in Vintage Postcards” shows the name Empress on the theater’s vertical sign, so that was surely its opening name.

Savoy & 80 Market n.w.: You are not going to find it on current maps because it does not exist. During the “urban renewal” they eliminated Market n.w. The Savoy sat where the new Art Museum sits. Market was the strip of land between the Art Museum and Rosa Parks Circle on current maps.

It is possible that Rapp & Rapp did some work on this theater for the Keith-Albee circuit after it took the house over from the original operators, Sullivan & Considine, but the original architect of the Empress Theatre was Lee DeCamp, according to a list in the Grand Rapids Buildings Collection of the Grand Rapids Public Library.

DeCamp was for several years the supervising architect for the Sullivan & Considine circuit, and designed many of the Empress Theatres the chain operated. He also maintained an office in the Empress Theatre Building at least as late as 1918.

The Sullivan & Considine circuit, financially overextended, was falling apart as the Grand Rapids Empress was being built. In 1914, Marcus Loew made a bid to take over the circuit entirely, but this deal fell through and the more than 100 Sullivan & Considine houses in the United States and Canada were subsequently divided among several other circuits, including Pantages, Orpheum, and Keith-Albee.

Lee DeCamp designed at least one other theater in Grand Rapids, this in 1915, but I’ve been unable to track down which one it was, assuming the project was carried out. He was also designing two theaters in Battle Creek and one in Alpena in 1917, according to an item in an issue of The Music Trade Review that year, which gave Grand Rapids as the location of his office.

An item in The Construction News of August 9, 1913, not only confirms that Lee DeCamp was the original architect for the Empress Theatre, but that Robert Boller was involved in the project as well:

It’s possible that Robert Boller was the supervising architect for the Grand Rapids Empress, or he might have had a hand in the design of the house as well. I’ve been unable to discover how long Robert Boller headed DeCamp’s “temporary” office in Grand Rapids, but in the December, 1921, issue of The Michigan Engineer, DeCamp was still listed as a registered architect with offices in the Empress Theatre Building in Grand Rapids.

DeCamp had some later association with the Boller brothers as well, but the roles were reversed. The NRHP registration form for the Booth Theatre, at Independence, Kansas, says that DeCamp was the construction superintendent for that 1926-1927 Boller Brothers project.

This interesting document is from the diary of Gerrit Winsemius, a Dutch immigrant to Grand Rapids who installed and repaired organs. This is an entry mentioning the Empress Theatre: “1914 Aug 24 Empress theater, Bond Ave + Lyon Street first used.”

It must have been Winsemius who installed the Empress Theatre’s first organ, the Kimball mentioned in an earlier comment by lostmemory. Mr. Winsemius' terseness leaves it unclear whether the “first used” refers to the organ or to the theater itself. In any case, I’ve found references in The Billboard to acts appearing at the Empress in 1914, so that must be the year it opened. The 1915 Variety item cited earlier by JAlex must refer to the reopening of the house under the Keith circuit’s operation.

The April 30, 1930, issue of The Pittsburgh Press has this article about the takeover of the Harris circuit’s theaters by the Warners and RKO. Among the houses being taken over by RKO the article lists the Regent and Empress Theatres in Grand Rapids.

I’m beginning to doubt that this theater was ever called simply Keith’s Theatre during the 1910s or 1920s. I’ve found over 400 references to the Empress Theatre from 1915 to 1922, and only one of them refers to it as Keith’s Empress. It looks like the house only became Keith’s Theatre after RKO took over operation, but how long after I don’t know. The earliest photo I’ve seen with the name Keith’s on the vertical sign dates from 1946 (seenhere at CinemaTour.)