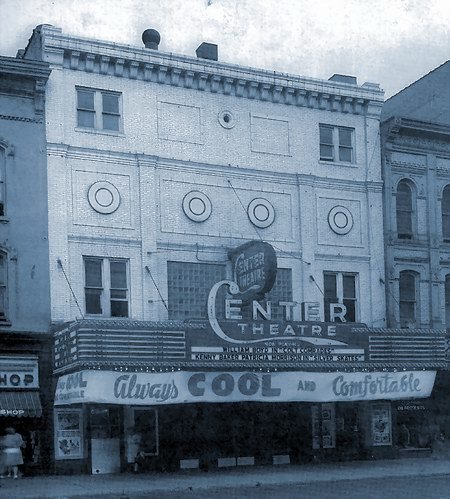 Opened by 1916 as the Isis Theatre. In 1938 it was remodelled and became the Center Theatre. Seating was listed at 872. This theatre was part of the Butterfield Theaters Chain.

The Center Theatre closed in 1955 and was later demolished. The site where the theatre once stood is now part of the Devos Place Convention & Performance Center. Any further information on the Center Theatre would be appreciated.

Theatre opened as the Isis in 1916. Original policy was pictures and vaudeville.

The 1922 Grand Rapids City Directory lists the theater at 240 Monroe Avenue as the Iris Theatre, rather than the Isis. I don’t know if that was a typo or not. I’ve been unable to find any other references to either an Isis or an Iris Theatre in Grand Rapids.

An Isis Theatre is listed in the 1916 Grand Rapids City Directory, but its address is given as 250-242 Monroe. The 250 was probably a typo. The name Iris in the 1922 directory was most likely a typo as well.

I hope this link to a GR Public Museum picture of the Isis Theatre works (no spaces):

A description of the Isis Theatre as it would appear after being remodeled and reopened as the Center appeared in the July 2, 1938, issue of The Film Daily:

“Isis, Grand Rapids, Will Be Remodeled as Center

“Grand Rapids, Mich. — The Isis Theater here will undergo complete modernization at an estimated cost of $35,000, according to E. C. Beatty, president of W. S. Butterfield Theaters, Inc. The remodeled theater will open early in August and will be known as the Center Theater. The plans include re-facing of the front with macotta, using Chinese red, forest green and stainless steel.

“The lobby will be completely redone with new terrazzo floor, walnut marlite walls and a ceiling of acoustic tile. The foyer will match in finish. The auditorium will have new flooring, the stage wall will be moved back and walls will be covered to improve sound.

“American Seating Co. will install 1,000 upholstered seats. The wiring will be renewed and a new marquee, sign and attraction board will match the macotta front.”For those unfamiliar with it, Macotta was a decorative tile made of colored porcelain-over-concrete panels, which competed with glass-based rivals such as Vitrolite.

This theater became the Grand Rapids Civic Theater in the mid 50’s early 60’s until it was torn down during urban renewal. I do not remember there being much of a lobby, but the Civic Theater took over the building next door (to the right in the picture) to build dressing rooms, a backstage area, a large lobby/rehearsal hall. The theater had a large basement where we also rehearsed. I acted in several plays there as a child and saw many plays there. I never saw a movie there.