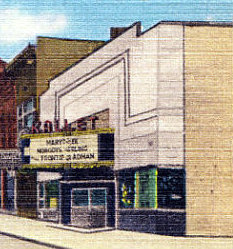 It was renovated and underwent a multi-million dollar upgrade, and reopened in 2013 as a concert venue and community center.

The dates I cited were from the Mexico Independent Thursday August 1, 1935: “New Temple Theatre opening Friday” and the Oswego Palladium Times June 6, 1939: “Pulaski theatre to open on Wednsday”.
The reference to the New Temple Theatre merely meant that the Kalletshad bought the lease from the Hohman family and had remodeled the theatre.
Yes, the Kallets also operated the LeRoy theatre.

Here’s a vintage postcard I recently scanned: View link
It’s the Art Deco style remodelation, although Art Deco seams to be a bit too much credit judging from the postcard.

Here is another marquee photo:
http://tinyurl.com/y4x86dv

The report of the fire that destroyed the Temple Theatre in the Oswego Palladium-Times of January 23, 1939, said: “M. J. Kallet of Oneida, head of the Kallet chain of theaters, and architect George Ketcham of Utica arrived in Pulaski Monday noon to look over the ruins.”

The February 9 issue of the same publication also mentioned Ketcham, saying that he was preparing the plans for the new theater, though this item gave the location of his office as Syracuse. That article also noted that Kallet had purchased the lot adjacent to the Temple Theatre, and that the new house would probably have a parking lot on one of the lots. The adjacent lot had been the site of the Hohman Opera House, which had itself burned down some years before.

Cezar Del Valle attributes the design of the Astor Theatre in Attica, New York, to George Ketcham, too. See the caption to this photo at Flickr.

I should clarify my previous comment by saying that the confusion over the date of the Kallet Theatre’s construction probably stemmed from the fact that it occupied the sites of two burned theaters, one of which, the former Hohman Opera House, which apparently operated as a movie house called the Pulaski Theatre during its last years, did burn down in 1934. The Temple burned in 1939 and the Kallet, a bit wider than the Temple, was built on the site of the Temple and partly on the site of the Hohman.

This PDF of the February 8, 1939, issue of Oswego Palladium-Tmes has an article about Kallet’s purchase of the Hohman Block/Pulaski Theatre site adjacent to the Temple Theatre. The Hohman Block and the Temple Theater were not the same building. George Ketcham is once again mentioned as the architect who was designing the new theater. All the sources online attributing the design to Milo Folley are fairly recent (2008 or later), and give 1938 as the year he designed it. I’ll trust the period sources that say George Ketcham designed it in 1939.

I’ve seen a couple of sources saying that Folley remodeled the Temple Theatre in 1938. That’s certainly possible. It’s also possible that Folley was working in one of Ketcham’s offices in 1939 (Ketcham’s main office was in Syracuse, but he had a branch office in Utica) and that he was given the task of designing the Kallet.

But one source I found indicated that Foley was 82 years old in 1998, which would have made him about 23 in 1939. That would not have prevented him from designing a major project at that time, but it makes it less likely that he did. That’s the age at which most architects are serving as draftsmen in someone else’s firm, not designing buildings on their own.

Neither have I found any sources saying that there was any connection between Ketcham and Folley. Unless a period source turns up identifying Folley as the architect of this theater, I’m still inclined to accept the known period sources naming Ketcham as the architect of the 1939 project. A 1986 newspaper article- almost fifty years after the Kallet Theatre was built- just isn’t enough.

The Kallet Theatre has actually been renovated and re-opened as of 2014. It is currently being used as a community center and concert venue.

The Kallet Theatre was twinned in 1979.