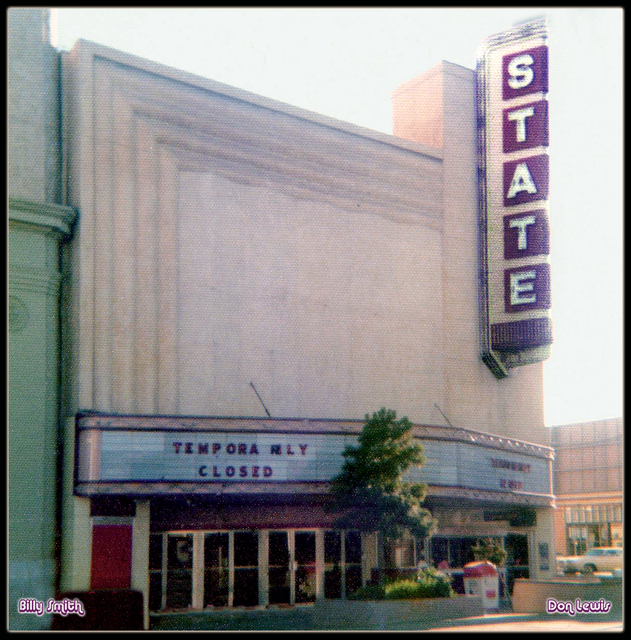 The State Theatre was opened October 12, 1949. It was built on the site of the Mesa Theatre (formerly Pastime Theatre). It was operated by Paramount Picture Inc. through their subsidiary Hoblitzelle & O'Donnell. It was still open in 1955. It has been converted into offices and a restaurant.

Note the different address in this 1956 article:

FLUID SITUATION: Flood waters which flowed into the lobby of the
State Theater, 213 Central NW, last night created all sorts of problems. Here, an employee sweeps water out the lobby entrance. Flood waters, brought by the first heavy rain of the season,
flowed into several downtown business establishments.

Early Action Due On Branch Bank And New Theater

Construction of a new theater on the Mesa Theater site at 213 West Central and a new branch bank at Candelaria Road and North Fourth moved a step nearer Wednesday. George Tucker of Albuquerque Theaters Inc., said the Mesa Theater has been closed in preparation to demolish the building and the adjoining location, formerly occupied
by Butts Drug, so a new theater can be erected. He said permit for the new theater has not been received, but is expected soon. He estimated the new, larger theater would seat from 900 to 3000 patrons.

A 1974 view of the State Theater in Albuquerque.

There are offices on the upper floors and Al’s NYPD Pizza is on the ground level.

October 12th, 1949 grand opening ad in the photo section. The Pastime (AKA: Mesa) theatre also stood on its site.

rivest266’s 1949 grand opening ad shows that this house opened as the Sate Theatre, so it never had the aka Mesa Theatre. That name belonged only to its demolished predecessor.

Also, we have the wrong address for the building. As it was on the same site as the Mesa Theatre, plus the adjacent lot, it had to have been in the 200 block. The current ground floor restaurant in the building, JC’s New York Pizza Dept., uses the address 215 Central Ave. NW.

350 was the seating capacity of the demolished Mesa Theatre. The State had a larger footprint and must have had at least twice that capacity, and probably even more. This was a downtown, first-run house in New Mexico’s largest city, after all.

Albuquerque Theatres Inc., operator of the State, was 50% owned by Karl Holblitzelle’s Texas Consolidated Theatres which was in turn 50% owned by Paramount Publix Corporation.

I just added three photos in the PHOTO section. But I am not 100% positive they belong here. First Man In Space was premiered at the State Theatre in Albuquerque. There was even a contest run by nearby hobby shop. The photos are suppose to be of this event. But the State marquee looks different from the earlier posted photos shown here. Can anyone shed some light on this?

The only reference I have been able to find regarding “First Man Into Space” and New Mexico is that it was filmed there. It was released in the U.S. February 27 1959. The premiere photos are definitely at a different State Theatre, but it is best to leave them up until we can narrow down which State Theatre that they are from. Which will take some time given how common the name is.

Seen in the 1970 movie “Flap” in a march scene (vertical sign only) if you have good eyes and use the slow motion device on your remote. On Warner Home Video (some years back.