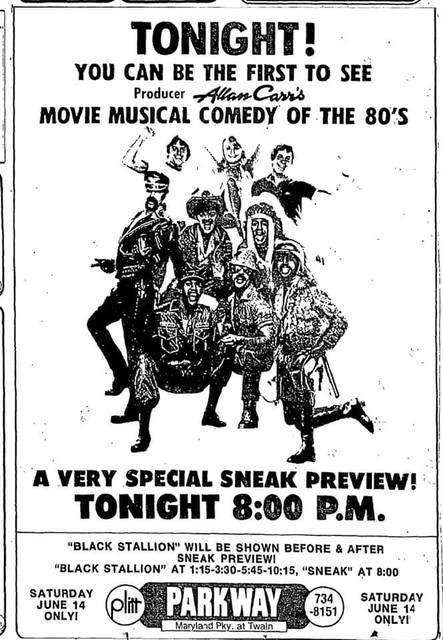 The 28,000 square foot Parkway Theatre was located next to the Boulevard Mall on Maryland Parkway. It was opened as a single screen on February 11, 1970 with Barbra Streisand in “Hello Dolly”. On March 27, 1975 two adjacent spaces were converted into two extra screens and was renamed Parkway Cinemas. The theatre was closed in 1995. In 1996, the Parkway Cinemas became The Good Guys, an electronics store. By 2022 a 99 Ranch Food Store operates at this address.

I saw “The Exorcist” there and I think there was an ambulance outside and they were handing out barf bags. Also, the line to get in was so long.

LOL, Johnny! Little bits of William Castle’s goodies carried on into the ‘70s!

Saw “Star Wars” here as well in 1977. It was easy to sneak into from one screen to another later on, after they “multiplex” was set up.

There’s a thread on the Cinerama Theater, Stunko. The building is gone and the entire area is built-up now. The former location is on Paradise across from the Hughes Business Center – a massive complex of office buildings and restaurants.

When I research Las Vegas history on microfilm/finche, I’m always running across ads from movies at this location, Skyway, and MGM Grand’s old grindhouse.

Ron, that is an awesome addition to this page… Love it!

A message to KimF: INCORRECT on the Parkway’s original house being “divided up” – it wasn’t. When the theatre opened in 1970 (open feature: “Hello Dolly” with Babs Streisand & “Grumpy” Walter Matthau), the storefronts, next to it (on the left side), became a nightclub/bar/discotheque. It was unsuccessful – I believe the venture didn’t even last a year. Afterwards, that section sat idle for several years. The Parkway was originally owned & operated by ABC (yes, the TV network – they got into theatrical movie productions & running their own movie theatres, like the Parkway which was their only theatre here (Vegas) & probably their only one in the whole state of Nevada). ABC sold their theatres to Plitt sometime in either 1973 or 1974, and in ‘74 someone within the Plitt organization came up with the idea of turning those storefronts (spaces) into 2 dinky theatres (add-ons) to the Parkway’s “Big House”. The Parkway Theatre became “The Parkway 3” in early 1975, and the “grand opening” features were: Theatre 1 (a.k.a. “The Big House”): The Who’s “Tommy”, shown in Quintaphonic Sound. (I was there – went to the first matinee showing.)

Theatre 2 (a.k.a. “The Blue Dinky House”): “The Godfather II” – a “move-over” from “The Big House”, as the film (The Parkway’s big Xmas (1974) feature) was still doing business at the box office. This led to a postponement of Columbia Pictures' ‘X'rated (softcore) feature “Emmanuelle”. (Plitt’s newspaper ads for the “Parkway 3’s GRAND OPENING” originally announced that one, along with “Tommy”, were gonna be the opening features. This led to an “inside joke” – “Tommy”, in “the big house”, was promoted as “Your senses will never be the same!”, and “Emmanuelle”, in one of the dinky houses, going “You wanna make a bet on that, 'Thomas’?”)

Theatre 3 (a.k.a. “The Red Dinky House”): Richard Lester’s “The Four Musketeers” (a “sequel” / continuation of Lester’s “The Three Musketeers” which had its first run engagement at The Las Vegas Cinerama <– there’s your answer, Stunko.)

99 Ranch Food Store now at that location. It looks like this nmight be a new building though.