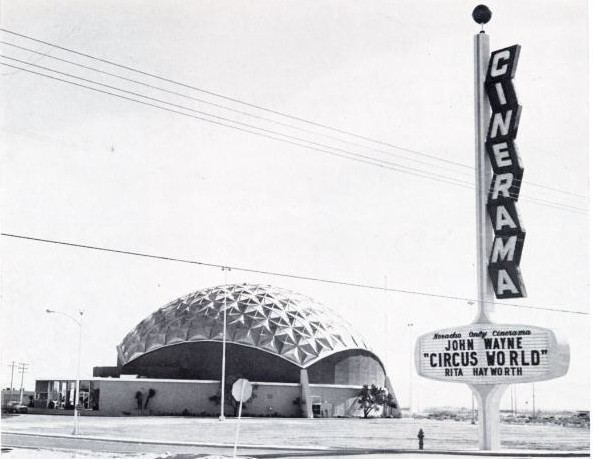 This giant domed Cinerama movie theater which originally opened January 13, 1965 with John Wayne in “Circus World”. It was torn down years ago and replaced by a strip mall, across the road from the Hughes Center.

Wow! How desperate were they for programming? LOL!

Lot of reminiscing folklore posted here about this one, that’s good. Let’s keep these amazing memories alive for the next generations.

The stretched aluminum roof was mind-bendingly novel back in 1965, perfected the year before at the NY World’s Fair.

First movie i saw here was “Earthquake” back in 1974. I lived in Hollywood, CA back then, where the film actually takes place, came up to Vegas for a few days and saw the flick there. They hauled in those giant subwoofers and placed them up front and in the rear of the auditorium. Two or three times during the movie, the low-frequency effects started, it was really something to experience that for the first time. I swear a couple of my tooth fillings got loosened in the mayhem.

Interesting that this theater was called “Cinerama,” of course it was built for Cinerama Corp, it’s just they never really showed any Cinerama movies here, the projector was 70mm. So, they showed Todd-AO, Super Panavision 70, and Ultra Panavision 70 type of 70mm movies mostly with 6-channel surround sound.

According to the article linked here, the screen was 90-ft x 43-ft in size, that makes its aspect ratio 2.091. A bit strange, considering that the Todd-AO and similar presentations were shot with spherical lenses in the 2.20:1 aspect ratio.

By 1976 I moved to Las Vegas to attend UNLV, and I was a production assistant on Clint Eastwood/Sandra Locke flick “The Gauntlet” the day they blew up that ambulance parked on the drive off of Paradise leading to the Cinerama. The whole movie crew incl. Eastwood stayed at the Jockey Club on the Strip (just south of Flamingo).

Altogether, this was a heckuva wonderful cinema, world class and cutting edge. My heart broke when it was “turned over” to a Korean church. So, it’s perhaps better now that it’s demolished, we will always have its memories from the glory days.

I worked at the Cinerama in 1969 with Nancy Friggle, Nancy LeSeur and a girl whose last name was Salyer, her brother’s name was Bob.

I do not recall the first film I saw here, but I can say it was as early as 1965, in the 7th grade while attending K.O. Knudsen Jr. High, when I lived nearby in an apartment near of Reno and Koval lane, an area known then as “Churchill East”.

There are two films I remember very well that played while I was working there; Franco Zeffirelli’s “Romeo & Juliet” and “Last Summer” with Richard Thomas. I am still moved by this depiction of “Romeo & Juliet” and enjoy reviewing it to this day. The other, nnnnnnnot so much.

The 2nd is a very disturbing film, originally given an X rating, then later it was given an R rating after edits to a scene depicting rape. I am not sure which we played, but I do recall the rape scene as very graphic and was surprised we were showing it. Then again, I was only 16. After seeing this, I was never able to watch “The Walton’s” and see any innocence in Richard Thomas.

Our doorman was named Paul something, I seem to recall it as Germanic, like Dorfmann or Dortmunder, & he was two years older. I’ll remember it later, I’m sure, because it was an odd name.

Our manager was named Mr. Bailey, an overweight, florid-faced, hard-drinking, often gruff man, and his Asst. Mgr. was Mr. Bagwell, a tall, salt & pepper haired man, with an easygoing manner.

The night before his graduation, the doorman filled the trunk of his ‘63 Chevy sedan with ice & beer and we all made numerous trips to the parking lot for a cold one. During the last showing of the night,(Gone With the Wind", Paul and I climbed the scaffold behind the screen carrying two large metal garbage cans. At the point where Brett takes Charlotte in the embrace and kisses here, we dropped the cans within the scaffold and it created a hell of a commotion as they clattered their way to the floor. We were able to escape the building, pretending to police the lot. No one but Paul and I ever knew FOR SURE who did it.

A typical night had us making a large batch of popcorn and placing it in very large plastic bags, then unpacking any recent deliveries of supplies and stocking the candy counter. Also, we would haul up and/or down film cans to the projection booth.

Then police the parking lot, and be ready for the moviegoers, in uniform.

Once all the patrons were seated, and the film had begun, we went to work cleaning the bathrooms and doing maintenance on the lobby.

This meant applying furniture polish to the lobby walls paneling, then cleaning all the mirrored walls along each side of the entrance, and lastly cleaning the 20' high glass panels & doors that fronted the lobby all across the entrance.

It was a great place to view a movie and had an awesome sound system for its' day.

I can’t recall his name today, but one of the projectionists was also one of my Dad’s sponsors into the I.A.T.S.E. Local 720 Stagehands. Dad retired from the Local after 30 years, a Gold Card Member, with 25 years at the The Tropicana, in the Folies Berger Theatre (that is another story in itself, the room was commissioned by Sammy Davis, Jr. as the “Superstar Theatre” and was a staging and acoustic dream of its' day) as the Head Soundman. I joined the Local in April 1974 and quit working the stage in Aug 1995. Today at age 58, I am drawing my pension which I took 10 years early.

I left Las Vegas in 1998, moving my 2nd wife and 10 yr. old daughter to SW Missouri, seeking a better quality of life than was present in Vegas at the time.

I could never live there again, as it is, but feel I was fortunate to have lived, and worked there, during the best of times possible.

I have learned in my travels since 1998, which includes all 49 States in North America, and Ontario, Canada, is that rather than demolish architecture for new growth, most communities preserve it.

I have seen so many historical sites that would have never survived the culture in Las Vegas, and rue the destruction of the past so prevalent there.

As you can tell by my post, I have a passion, and yet a distaste, for Las Vegas. Well, after all, I did live 34 of my 58 years there. Came of age there in the 1960’s started two families there, and still have family there.

Once it is in your blood, there are two things that never leave; Show Business & Las Vegas!

Now I’m angry! With Caesar’s Palace removal of the Omnimax, and this theater gone …

Just to note… The theater was actually located across the street from what is now the Hughes Center. There’s a strip mall with restaurants, etc., in its place.

Loved the Cinerama! Saw “Night of the Living Dead” for the first time there, plus tons of other movies.

I saw Gran Prix at this beauty with my dad. He would always take the kids to movies with him on week nights. It was awesome. The one memory that is truly etched in my mind was when Planet of the Apes was playing, the ushers were wearing ape masks. At the time I thought that was the coolest thing.

I was a Freshman at Gorman 1965 when my Dad and I saw “Battle of the Bulge” the surround sound was awesome and I can still hear the squeaky metal tread links, in my head, as the Tanks seemed to roll over the audience. I was really jacked leaving the show, until I crossed paths with my scary, History Teacher, on the way out. As he glared at me and says “Mr. Wiley”, and he wasn’t talking to my Dad. The Dude was Scary!

I saw Jesus Christ Superstar there. And Billy Graham there as well!

All good however this theater was not torn down and replaced by The Hughes Center.

After reading the above comments, here’s what actually happened to the Las Vegas Cinerama: After the first run engagement of the 3rd “Dirty Harry” movie, “The Enforcer”, manager Art Bailey decides “enough is enough” & closes the theatre. (This happened around January of 1977.) A month later, the building reopens as “The Las Vegas CENtERAMA” (with the ’t' looking like a cross). The building was taken over by a reverend / preacher / pastor / whatever named Sharp. (Sharp “suckered” celeberties, like Elvis Presley, to donate “big bucks” for him to buy the building. Sharp’s original plans, along with turning the theatre into a christian church {and NOT a Korean one, as previous stated above}, included additions, like a non-gaming hotel & a christian school / pre-school. Sharp, through some kind of deal / negotiation with Bailey, starts running Sunday Morning sermons at the theatre in early 1976.) Sharp, keeps running movies – although the majority of them are either religious-based or family-type ones. Because Sharp isn’t charging admission prices and/or asking for donations (to keep his “future dreams alive”), the CENtERAMA eventually closes as well (unknown on when this happens).

In 1983, I was the non-union film projectionist for the Huntridge Twin theatre. Not long after I started working there, there was talk about “Roberts Theatres” “expanding operations” (Roberts, along with running the Huntridge, also ran The Mountain View triplex)– “Bob Roberts” (real name: Bob Garganese) wanted to reopen the Cinerama (as a 2nd / sub-run house, just like what he was doing with both the Huntridge & the Mountain View). Unfortunately, the Hughes Corp.(owners of the property that the Cinerama was sitting on)“wanted TOO MUCH money for a monthly rental”. I believe it was sometime in 1984 that the building was demolished to make way for what is there now – A STUPID MONEY-LOSING “MINI-MALL” (if you can call it that).

In regards to David Reed’s comments on “Last Summer” – Yeah, it was kinda disturbing towards the end (I saw it, as a co-feature to “Easy Rider” at the long-gone Skyway Drive-In. And yes, you are right about “Last Summer” originally getting an ‘X’ rating. However, believe it or not, it wasn’t so much about the rape scene (maybe) – the film originally got an ‘X’ due to a couple of scenes with Barbara Hershey (an early film for her) – in this one, she was either nude or, at least, topless. Hershey' character, “Sandy”, was also a bitch & “a prick tease” – hence the nude / topless scenes, which the M.P.A.A. thought was a “bit too much” at the time. As for the rape scene, “Sandy” couldn’t stand “Rhoda” (played by Cathy Burns, who also got an Academy Award nomination for “Best Supporting Actress), so she "eggs” the 2 guys (played by Richard Thomas & Bruce Davison – this was their first movie)with cries of “DO IT!”

Trivia: The Las Vegas Cinerama, 2 years later (1971) shows, as a first run feature, “Red Sky At Morning”, a reunion film for Richard Thomas & Cathy Burns. In 1972, the Cinerama also runs, as a first run feature, “Ben” – a sequel to 1971’s “Willard”. Although the Cinerama doesn’t run “Willard”, the beginning of “Ben”, shows flashbacks, during the opening credits, of Bruce Davison as “Willard”.

More trivia: the Cinerama shows as a co-feature to “Ben” – a ‘PG’ rated movie about murderous rats – “Night Of The Living Dead”. And yet when this happened, the theatre gets complaints – not so much about “Ben” but about “THAT GROSS, ZOMBIE FLICK!” (By today’s standards – it’s the summer of 2018 as I write this – “Night Of The Living Dead” is practically “tame”, compared to TV’s “The Walking Dead”.)