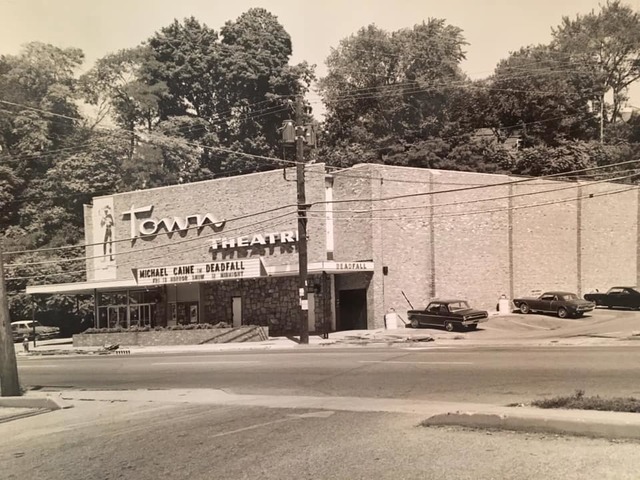 In 1961, the Town Theatre was built down the street to its identical sister theatre, the Glen Cove Theatre.

It closed in the 1970’s and lay unused for many years until it was eventually demolished.

I don’t think I’d even started kindergarten when the Town Theater was closed and demolished, which puts it around 1978-9. IIRC it had a reddish brick front with some odd art piece on the right side of the facade. I want to say it had two screens – I recall a rectangular marquee which took up most of the front and was split. It was just about on the corner of Glen Street and Town Path, where there’s now a group of stores including Radio Shack. My husband tells me Young Frankenstein played there, and I recall Grease, which should help date it.

Which came first the Glen Cove or the Town. They were built side by side and looked identical from the outside.

The Town and the adjacent Glen Cove were both designed by Queens architect Leon A. Miller, according to his biographical listing in the 1962 AIA Directory. The Glen Cove was the earlier project, built in 1959. The Town was built in 1961.

A couple of photos illustrate an article about the Town Theatre that begins on this page of the July, 1961, issue of International Projectionist.

This comment by dw438 on a Cinema Treasures news post says that the Town Theatre was down the block from the Glen Cove Theatre, beyond a McDonald’s, and was torn down and replaced by shops in the 1970s. The front store in the strip mall north of McDonalds is the Wild Fig restaurant, which has an address of 157 Glen Street. As the Town Theatre is gone, that’s probably the closest we’ll get to its address until an old directory listing shows up. The Glen Cove Theatre building is still standing, occupied by a Dollar Tree Store.

The Town and the Glen Cove were next to each other, almost like formerly cojoined twins. Don’t remember which was to the right, or left, of which. Therefore, the addresses can’t be all that different.

The Town was closed before 1979 and it’s adjacent sister, the Glen Cove, was a 78 cent discount house according to the ad in the classic June 1979 issue of Newsday issued as a supplement today.