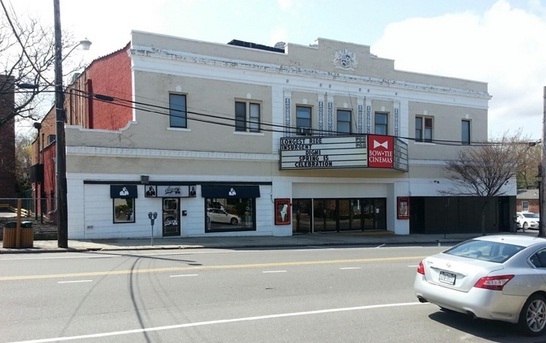 The Beacon Theatre opened on October 15, 1927, and was once a large, venerable single screener. On December 24, 1976 it was one of the first local theatres to be triplexed, with the balcony becoming one theatre and two downstairs.

On November 15, 1985 it was converted into a quad (with two upstairs), then a five-plex (with the old stage being turned into a theatre), and finally a seven-plex on August 25, 1989, with the addition of two alleged "theatres" that hold around forty people over six rows of beat up seats. Operated by Clearview Cinemas from September 1995, it was taken over in June 2013 by Bow-Tie Cinemas, who took most Clearview locations. It was closed January 28, 2018.

“Death In Venice” came out in 1970-1, the small theatres didn’t exist then, it was a different Dirk Bogarde movie, maybe “Daddy Nostolgia” if my memory still serves me.

Hi, Orlando – I am so happy to know that you recovered from the heart attack, and certainly not because of the tidbit(!), for which I otherwise am grateful. It was an important and now iretrievable piece of history, the last of its kind on Long Island, as well as a unique and beautiful instrument. (As a full time professional musician of more than 30 years – part of a rich Port tradition, actually – I can attest to the fact that no two instruments of any sort are exactly alike.) I heard a rumor that, after learning about the organ’s restoration, Count Basie once came to Port from his home in Queens during a tour break to play it. He always loved theater organs, and was taught to play on one in Harlem by Fats Waller. I could swear that I heard about it at the time of his alleged visit, as well as plans for a full concert with the band featuring Basie at the console, but I haven’t found a shred of evidence that either of those things ever happened. I turned 12 late in 1976. Kids tend to hear lots of things that are just talk and believe them to be facts. Regardless, thank you for putting this sad story on the record and the matter to rest. I wish you continued good health and a beautiful Summer – and hopefully, on my weekly visits to town from NYC, I’ll see you at the Town Dock!

GAH! I wish I had seen the earlier comments when I first came to this site back in February, I didn’t know they were here! “Sticky” posted over a decade ago that he went to hear and see the Basie Band, and met them backstage! I really wanted it to be true that it had happened. The fact that we know definitively that Basie played it makes the loss of the organ all the more tragic and infuriating. The story until now was that the organ had not been removed, but was intact nonetheless.

The Long island market is over saturation.

fred – certain locations may be saturated but in others you have to drive more than 15 miles to a theater.

Long Island is compact area . I figure residents will rather go to a Regal or AMC , that go to a theater near them .

Regal and AMC do not serve the east end. Stony Brook is furthest AMC; Ronkonkoma for Regal. Regal was going to build in Riverhead but the landlord of the shopping center was demanding they virtually overhaul his shopping center. East end is served by the (seasonal) Greenport, Mattituck, Hampton Arts Twin, East Hampton, Southampton, Plaza, Mastic, Hampton Bays, Cinema Deluxe (Holbrook), Movieland (Coram), the Port Jefferson Cinemas and, after the rebuild, Sag Harbor. Occasional films at WHBPAC. Look at the South Shore – every community used to have at least one theater. Last big ones are the AMC Fantasy (RVC) and Regal Lynbrook. Next east small theaters in Baldwin, Bellmore, Seaford, Merrick and nothing until the aformentioned Plaza in Patchogue. Nothing in Valley Stream, Wantagh, Freeport, Bay Shore, Lindenhurst, Oakdale, Amityville, Copiague, the Massapequas, Babylon. The 100 seat Plaza in Patchogue is nothing compared to the two large theaters, the All Weather multiplex and the Sun Wave twin which used to be there.

Uploaded a 1931 ad showing management under the Century banner. Later became Skouras. Never could understand the Century/Skouras relationship as management passed from one to the other chain and combined ads appeared in newspapers.