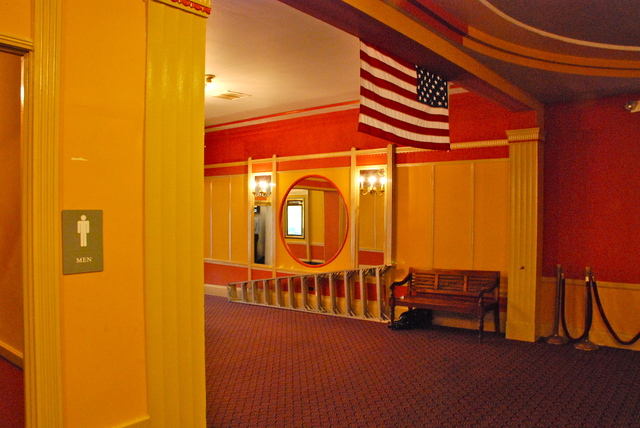 Originally opened by the Century Circuit Inc. on November 23, 1936, it was managed by Skouras Theatres. The Manhasset Theater was left to operate as one of the few remaining main street movie houses in Nassau County. Although the old auditorium has been carved up into three small screens, the Art Deco style facade and curved marquee remain beautifully intact.

Prior to Clearview CInemas operating the theatre, it was operated for years by United Artists Theatre Circuit. It was sold to Clearview during UA financial problems.

And before that by Skouras.

According to trade journal research, the Manhasset Theatre opened on November 23rd, 1936, which was the Monday before Thanksgiving of that year. Although built by the Century Circuit simultaneously with the Elm and Quentin in Brooklyn, the Manhasset would be managed by Skouras Theatres, which, in 1935, had signed a “pooling” agreement with Century for all of their theatres in Queens and Long Island. George Skouras, head of that company, wanted to use the Manhasset as a test for ending double features in communities with a single theatre and no nearby competition…The overview to this listing claims that the Manhasset Theatre first opened in 1927, which could be true if it was “modernized” into the one of 1936. But nothing turned up in research to justify that possibility.

Aha. That explains joint movie ads in the past for Century and Skouras which always seemed odd to me. Century also had deals with Loew’s for the Prospect in Flushing and the Manor/Vogue in Brooklyn. Although they built the Suffolk in Riverhead there was some sort of swap with Prudential for the Huntington Station.

Based on the article from the Manhasset Press, this theatre is CLOSED

From manhassetpress.com website Manhasset Cinemas Sues Landlord For Breach Of Surrender Agreement The movie theatre has been closed since March

Manhasset Cinema, 430 Plandome Rd. (Photos by Marco Schaden) Manhasset Movie Theatre, also known as Manhasset Cinemas, and Roslyn Movie Theatre filed a lawsuit on May 26, 2020, against their landlord Gilman Management Corporation for not abiding by a surrender agreement that was signed on Dec. 16, 2019. The lessee and operator of the two theatres, Rudy Toolaprashad, approached Gilman in the fall of 2019 to enter a surrender agreement of the lease that would come into effect on April 30, 2020, and pay Toolaprashad $157,500 for the movie theatre equipment he purchased from Gilman.

On April 30, 2020, Toolaprashad went ahead with the surrender agreement despite lack of feedback and no representation from Gilman at the theatres for inspection of the properties. At that point, both movie theatres had been closed due to Governor Cuomo’s executive order closing all movie theatre’s in the state. Both movie theatres have not been open at any point since March despite the governor reopening theatres with limited capacity.

Toolaprashad never received the monies he was owed by Gilman as part of the surrender agreement and proceeded to file a lawsuit. Through court proceedings, Judge Steven Jaeger has sent the two parties into mediation, scheduled at some point in December to resolve the matter. Gilman and their attorneys did not respond to requests for comment.

“They don’t want to pay my client, they want to control the timing of everything that happens and when it happens and what they want to do is put the entire burden of coronavirus on my client,” Toolaprashad’s lawyer Vincent Lentini said. “My client performed all their obligations under the agreement and the defendants have not. Defendant’s only obligation was to pay and they have not done that.”

The theatre’s new tenant started its lease in April, but by the fall of 2019 the tenant decided to enter a surrender agreement that would nullify the lease as of April 30, 2020, and pay the tenant $157,500 for the movie equipment previously bought. In court documents that were filed in the Nassau County Supreme Court, Gilman argues that Toolaprashad is violating the surrender agreement because a new tenant must be in place to take over the movie theatres. Lentini, states in court documents that his client was training a Gilman employee, “Steve,” to learn the business of running a movie theatre as part of the surrender agreement as Gilman planned on running their own movie theatres in the two locations and not look for another tenant.

“[Gilman] formed two new companies that were going to run these movie theaters. [Gilman] was going to operate it [themselves],” Lentini said. “From December through March, my client trained Steve on how to run a movie theater, how to run projectors, how to do ticketing, how to order the movies, how to speak to the booker. If they were getting another tenant in, I wouldn’t need to train anybody.”

In an email to Vincent Lentini dated April 16, 2020, Doug Spector, a Gilman lawyer, states “My client’s position is that no one is closing a movie theatre that is not allowed to be open in the first place. His position is that in these unprecedented times we are facing a public health crisis and are under a statewide order to stay at home that is a more than reasonable position. As soon as the theater is permitted to open, he is prepared to arrange for an orderly surrender.”

The theatre has reopened and the status should be changed. Unfortunately that is not yet the case for the Roslyn, Herricks, Squire, Soundview, North Shore Towers, Malverne, Bellmore Movies, Grand Avenue Cinemas or Franklin Square.

Malverne, Bellmore and NorthShore is reopening. Their was a newspaper article about Franklin Square closed permently and Grand Avenue had for rent signs posted.

PLEASE update open, and it became a triplex on February 15,1980