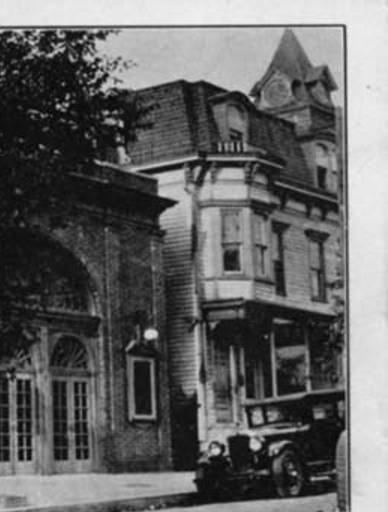 According to a reference in "This is Great Neck", published by the Great Neck League of Women Voters, the Mayfair Theatre possessed a unique attribute for a theatre constructed in the early-1900’s; an auditorium with a sloping floor. Admission was 15 cents.

According to the 1927 Directory of Motion Picture Theatres, Metropolitan Territory, the seating capacity was 350. Coincidentally, 1927 is the last year the Mayfair Theatre was listed in the telephone book. In 1928 the only theatre listed in Great Neck was the Playhouse, probably the year it opened.

Although most buildings on the North Station Plaza have been granted landmark status the Mayfair Theatre, unfortunately, was demolished before such action was taken. There is now a bank on the site.

Thanks Warren. Now, I’ll go back to the Library page – I see they haven’t corrected the address yet – to see what components you picked up to achieve the link and then I’ll try one of my own.

The May 8, 1926, issue of Motion Picture News had an item about a “Mayfield” Theatre at Great Neck, as did the July 10 issue. I don’t know if this was a repeated error or if the theater actually changed names. In the May item, the house had just been taken over by Irving Lesser, operator of the Great Neck Playhouse:

“Irving Lesser continues to expand his theatre circuit. According to report, the latest house to be taken over by him is the Mayfield, Great Neck, L. I. This is number five in the chain, the others being the Great Neck Playhouse, the Strand at Rockville Centre, Memorial Hall, Beacon, N. Y., and the Capitol at Haverstraw.”

The July item said that the house was temporarily closed and would reopen on August 1.

If the Mayfair closed by 1928, it must have reopened later. The July 28, 1932, issue of The Film Daily had the Mayfair, Great Neck, listed in its “Closings” column. Some theaters were seasonal in those days, so this might have been another temporary closing and the Mayfair might have opened yet again.

This house might have been called the Great Neck Theatre in 1921. The December 10 issue of Exhibitors Trade Review said that the world premier of the Warner Brothers production School Days had been given its world premier at the Great Neck Theatre on November 24. Another item in the same issue, datelined Gret Neck, said that the movie had been given its premier at “…the local picture house….”, suggesting that there was only the one movie theater in the town.

Uploaded a photo with image of the theater on the left. Will try and get a full image.

Uploaded a photo of a notice in the September 1920 Paramount Weekly that the Mayfair would be participating in a special exhibiting event.

Uploaded a photo of a notice in the September 1920 Paramount Weekly that the Mayfair would be participating in a special exhibiting event.