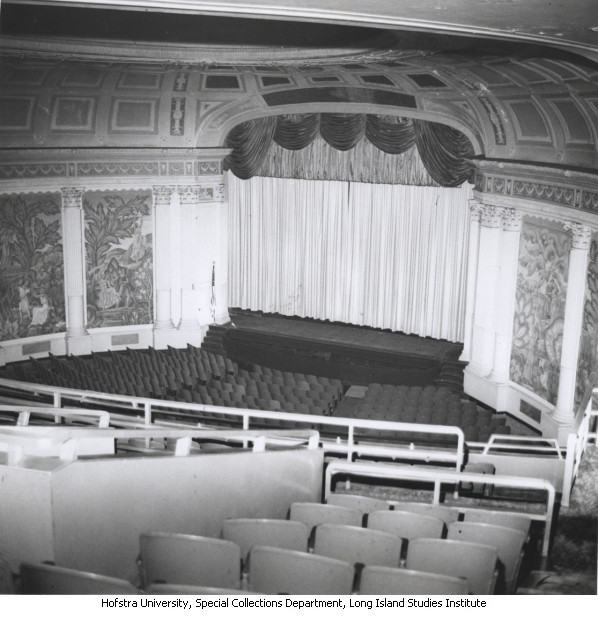 I last went to the Cove Theatre in the early-1970’s. I don’t remember much about it except that it was a good sized theatre possibly decorated in the French style. It was opened August 12, 1927 and harbored a Midmer-Losh organ. It was taken over by Skouras Theatres in 1931. It was renovated in March 1949. It was later transformed into a dinner theatre, but Glen Cove, NY is off the beaten path on the North Shore of Long Island and the draw was not all that good. It closed and was demolished.

I remember that the stage house with the stage exposed to the elements was the last to go and stood sadly in downtown Glen Cove for some time before being pulverized. It was replaced by some sort of condos or assisted living complex now.

Any idea what projectors might have been here in the early days?

Just to make things clear: this is the theater which stood on School St, not any of the three which stood on Glen St at various times. (BTW, our Stop & Shop has historical photos hung in the produce dept, and one of then shows the sign of the Cove’s sister theater, the Glen!)

If anyone could repost the auditorium photo, it would make some Girl Scouts very happy. :) Sadly I did not save it while the link worked.

I can’t comment on the projectors, but I got the link posted above to work by getting rid of the “i8” bit: View link

A view of the house from the stage

Alt view of house from stage

Click on the image to zoom in. Click on the thumbnail image to move the “red box” and change the area of detail to be viewed in the larger image.

Back in 1969 I worked part time as an usher at the Cove Theatre. The manager and I had our differences but she became my best friend when the Carroll Baker film Paranoia was to be shown. It had, at the time, an “X” rating (which by today’s standards would have been “R”) and I was the only part time usher old enough to work with an “X” rated film in the house. It was a double feature along with The Oblong Box starring Vincent Price. Needless to say the first ever “X” rated film shown in Glen Cove was well patronized. I became friends with the gentleman who worked the projection room and he used to play my LP’s of Everett Nourse at the SF Fox Wurlitzer during intermissions. The stage was filled with junk which included the old Midmer-Losh organ console minus its pedalboard. It had 3 manuals of which the lower one was of 88 keys. The pipe chambers were behind the stage left wall and had been pretty much trashed. It was Opus 5315 and consisted of 3 manuals & 10 ranks. It was installed in 1927. I remember seeing a central vacuuming system that still worked! I also remember taking black and white pictures of the auditorium which are very much like the ones already posted. I enjoyed working at the Cove back then.

I remember that I attended some great shows at NorthStage Dinner Theater. I guess I’m too young to remember it as the Cove. I saw Kreskin, and got called onstage with him twice! I also saw Uncle Floyd Vivino’s live show. In addition there were a number of plays I saw there, such as Damn Yankees and One Flew Over The Cuckoo’s Nest, which is extremely different from the movie. I am certain I saw another play there, but can’t remember what play it was.

Architected by Douglas Hall with Landish Studios of Rutherford, NJ providing draperies, stage furnishing, rigging, and scenary to the Cove.

Comfortably you all missed pointing out the incorrect spelling of “scenery” and the fact that furnishings were “for” not “to” the Cove.

The theater occasionally hosted rock concerts in the late ‘60s. One I recall attending consisted of Savoy Brown, Spooky Tooth, and a local band called either Rainy Daze or the Rainmakers. In '78, in the dinner theater era, I took in “Angel,” a musical version of Thomas Wolfe’s “Look Homeward, Angel,” starring Fred Gwynne (Herman Munster!) and Frances Sternhagen (Mrs. Marsh of Crest-ad fame).

I lived in Glen Cove from 1943 to 1953. I’d take the bus (a dime) from the Landing to go to the movies at the Cove. I remember how the ticket line would go way down School St when a Dean Martin / Jerry Lewis movie would be showing. I saw The Day the Earth Stood Still there in 1950 at the Saturday kids’ matinee. The Magnetic Monster, too. In 1949, there was a revival of 1939’s Wizard of Oz. I’ll never forget how the movie started in black and white, they dramatically switched to COLOR when the house landed in Oz. In the Cub Scouts, we were allowed to be guest ushers on one Saturday. I stayed all day and saw the movie twice.

My cousin was the concession counter salesgirl in the Glen Theatre on Glen Street. It showed all horror films. She would let me sit in the projection booth on a stool to watch movies while she was working. The Glen stood across the street from Sears where my dad worked.

Yikes, that was a long time ago!

Uploaded an ad from the Thursday, March 11, 1949 Glen Cove Record Advance announcing the “rededication” of the Cove theater. Another words they did a major renovation including the marquee which you can see in the ad. Would be nice if someone could find an actual picture of the post reno facade.