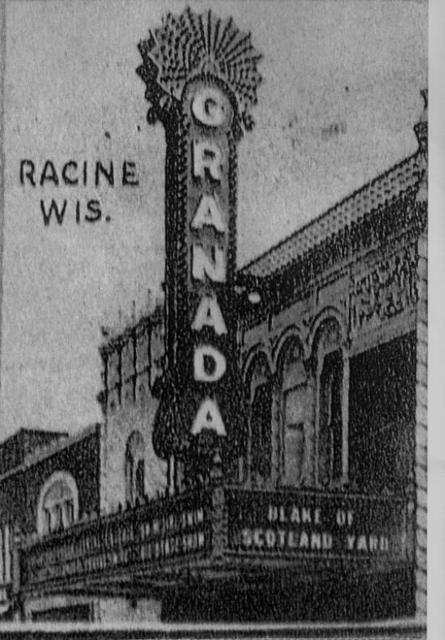 The Granada Theatre opened on Saturday, April 7, 1928 with “The Life of Riley” starring Charlie Riley and George Sidney. The initial chain was the S & M Amusement Company. There was a Kilgen Wonder Organ with 2 manuals 3 ranks, now removed but still existant. The locally-famous architect J. Mandor Matson, who also designed the Racine City Hall and a number of Racine churches (including St. Edwards) and schools (including Horlick High and Roosevelt). There is an innovative “crying room” and an owners' private box in the upper level.

By the 1950’s the Granada Theatre was managed by M. J. Krofta Theatres and was operating on weekend-only schedules, and it was closed on March 5, 1961. The owners sold to the Peter Beck Company which used it for storage and office space. More recently an auto dealer used the auditorium for storage. But the theatre remains largely intact and complete, even with a leveled floor.

In 2005 an inspired investor purchased the Granada Theatre for $150,000 and planned a correct restoration but with adaptive reuse in mind. This never materialised and the theatre is still used for storage.

Racine, Wis.â€"Two Milwaukee men were arrested here early today, following the burglary of the Granada theater, a suburban house. One of the men was caught after a chase of five blocks, halting only when the pursuing policeman fired several shots over his head. Loot totaling $450 was taken when the theater safe was opened. The men held give their names as Edwin Sampson, 25, 2060 58th street, and Eugene Hughes, 25, 7716 West Stevens street. Hughes confessed his part in the burglary and implicated Sampson, but the latter denied he participated, police said.

The loot consisted of $250 in checks, $45 in cash, a diamond ring a diamond brooch, a diamond stick pin and a gold watch. The checks, $10 in cash, the diamond stickpin and the brooch were found on Hughes' person, authorities said. A third Milwaukee man, believed to be the driver for the captured pair, was being sought by Racine and Milwaukee police. Racine police said Hughes and the driver answer the description of the men who shot and slightly wounded Earl Halberstadt, 35, tavern proprietor, in an attempted holdup here early Sunday morning. Halberstadt was shot in the head by two robbers who confronted him as he drove into his garage. The robbers fled.

The Life of Riley was released Septemer 3, 1927 and starred Charley Murray (former Keystone comedian) and George Sidney. Granada usually got films a few months after its release (as did most neighborhood theaters), which would explain its playing there upon the theater’s grand opening. It was released by First National Pictures, a division of Warner Brothers. As nearly 90 percent of all films made before 1930 are considered lost, it is unknown if a print of The Life of Riley survives today (if so, it would likely be in the Turner library and perhaps even a print at the Wisconsin Center for Film and Theater Research, as that has extensive holdings from Warner Brothers).

The Granada’s original Kilgen theatre organ is for sale! It was originally a 2/3 and though apparently mostly original, has some additional ranks added. It would be nice if the theatre could buy back their original organ to re-install!

The Granada Theatre provided the 700-pound switchboard for the Racine Playhouse at 601 High Street in 1961. It was installed
under the stage.

It’s still a beautiful building today. Does anyone know what happened to that huge marquee? Or an update on the restoration progress… is this theatre open again?

The item is two and a half years old, but here is a photo gallery with two historic and five modern photos of the Granada Theatre. As the auditorium floor has been leveled with concrete, it’s unlikely that this house will be returned to use as a theater. The owner as of October, 2010, intended to use the space as a banquet hall and events center.

This web page has four small photos of the facade by the construction company that did the restoration work.

I’ve been unable to find any recent reports on this project, and I can’t find a banquet hall or events center listed it its address. The project might have been stalled by the sluggish economy.

Jim and Mike Krekling of Krekling Painting helped on 2010 exterior facade restorations at the GRANADA. Rossi Construction as general contractor did tuckpointing and in the process, five previously-covered decorative bottle-glass windows were discovered above the entrance, and are now visible. Two of the five had been damaged, but were replicated. It’s true that the auditorium floor was leveled during its warehouseing years, but the stage and proscenium still stand intact above the new floor. I think the city is being unfair by demanding six dozen parking spaces before granting an occupancy permit, as a shuttle bus could easily carry visitors to other available nearby parking areas.

Grand opening ad in the photo section and below.

Update: In 2005, local businessman David Naumowicz purchased the Granada Theatre with the intention of restoring it and turning it into a banquet hall or events center, but because there was no nearby parking lot, the idea was considered unfeasible and was subsequently abandoned. Larry Vail, owner of Jim’s Garage Door Service, bought the Granada in 2015 and returned its use to a warehouse. Vail has kept some things intact, such as the fireplace in the lobby, one of the box seats, the proscenium arch and the original light fixtures on the ceiling, but said he has no plans to restore the theater. He performed a few renovations, but they were related to the warehouse use: a driveway behind the building on Carter Street, new exits and a large garage door for loading in the stagehouse. The ceiling and walls have been painted white but the walls have persistently leaked, resulting in water spots speckling the otherwise white interior.