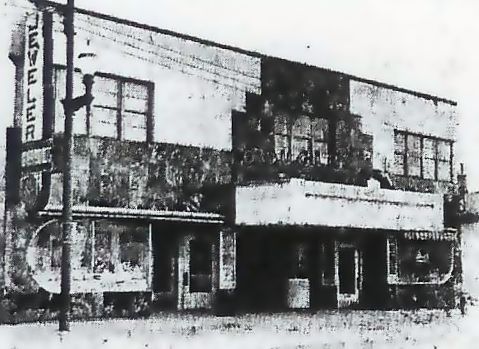 Opened on January 30, 1926, the Douglas Theatre was a modest one-level theatre on Racine’s near north side, operated for some years by Barney Sherman and family. It closed permanently in 1961 and was since redone into what became the Flatiron Mall. Few traces of the Douglas Theatre are still visible.

(Racine Journal Times, Monday, July 2, 1962)
Krusienskis Wed 50 Years
Mr. and Mrs. Walter Krusienski of 5826 Sunset Blvd. will celebrate their golden anniversary this month.
The couple was married at St. Joseph’s Church in Milwaukee on July 3. They owned and operated the Douglas Theatre until their retirement in 1944. They have two sons, Chester and Harold, and five grandchildren.

(July 7, 1930)
LOOT THEATRE OF $65
Racine â€"(UP)â€"Following an unsuccessful attempt to break in the front
door of the Granada theatre here Monday night, burglars entered the
Douglas theatre and escaped with $65.

The Lawrence Brill Real Estate agency announced it has purchased four properties in the 1600 block on Douglas Ave., including the 39-year old Douglas Theatre building and land at 1639.
Lawrence Brill said negotiations are underway to locate a new business operation on the theatre property and adjoining property purchased immediately north of it.
He did not disclose the nature of the business but said details will be announced.
The agencyâ€™s plans rule out further use of the theatre as a movie house, Brill said.
The theatre closed two years ago and has reopened for only a brief period, Brill said.

The theatre site has 75 front feet and is 350 feet deep, while the adjoining parcel is 70 feet wide and the same depth, Brill said. The latter land includes two dwellings, at 1647 and 1647-½ Douglas.
The theatre building also contains the Barrows Jewelry store (1641),
Zygas Cleaners & Dyers (1637), and apartments. The building and land were purchased from Erwin Koenigsreiter of Milwaukee, Brill said. The other two purchases are on the opposite side of Douglas avenue. Brill listed them as the commercial building at 1648 and the house behind it at 1648-½ and the land on which both stand, and the commercial building and land at 1652.
The commercial building at 1648 is occupied by the Universal Travel Service, with apartments upstairs.
The building at 1652 held the Kroupa Hardware Co. and was purchased from the estate of Anthony Kroupa, Brill said.
He said the business has been closed pending completion of a leasing agreement with “a Racine businessman” who will operate the store.
Brill said his firm will remodel the hardware building’s upper floor for office or apartment use.

The theater was built in 1923 by Mr. and Mrs. Walter Krusienski, who operated the business during its most prosperous years â€" first as a vaudeville and silent picture house and finally, when talkies killed vaudeville, as a seven-days-weekly movie house.
The Krusienskis sold the theater for $75,000 in 1945 to a pair of Milwaukee men, Dave and Bernard Sherman, who continued the business as a full-time operation, showing standard features.
In 1955, the operation was purchased by Erwin Koenigsreiter of Milwaukee, who showed standard features, then began “art film” programming and later Spanish language pictures. Programming had been reduced to a few days a week until the house closed two years ago.

The theater was re-opened last year for weekend movie showing, but closed after about a month of such operation.
The Krusienskis, retired, live at 5826 Sunset Blvd.
Mrs. Krusienski recalls that early programming at the Douglas consisted of vaudeville shows on Wednesdays, Saturdays and Sundays, with silent films on other days.
She remembers a vaudeville troupe out of Milwaukee headed by a song and dance man called â€œSlippy Doodlesâ€ as among the patronsâ€™ favorites.
Mrs. Krusienski says the effect television has had on the movie industry was foreseen to some extent by she and her husband and was among the reasons they sold in 1945.
“There were nine theaters in Racine and they were all making money until TV came in,” she said. Today, there are only three in business."

â€"Journal-Times Photo
The 39-year-old Douglas Theater, closed two years ago, has been sold for the third time. Plans for the building preclude the possibility
that movies will be shown there again.

(June 19, 1925) Plans were announced for construction of a new theatre in the 1600 block on Douglas Ave. Backing the project
were Walter Krusienski, Steven Dorece and Louis F. Rossa.

Headed by Ass’t. Dist. Atty. Louis Hardy, a police squad at 7:30 p. m. Thursday raided Foto Pay-Day in the lobby of the Douglas
Theater, 1639 Douglas Ave., seizing a rack containing approximately
6,000 small envelopes and photos of a youth who was last week’s winner of the $250 grand prize.
Sgt. Josepn Konicek, and Detectives Elmer Emmick and Earl Hahn, who were in the squad, said a long line of expectant patrons disbursed when they went into action.

The raid was ordered by Dist. Atty. Harold Koebel who said Atty. Gen. John E. Martin had given an opinion in which he found Foto Pay-Day to be a lottery. When it was advertised 10 days ago by Dave and Bernard Sherman, Milwaukee, operators of the theater, they were summoned to Koebel’s office with their attorney and warned not to continue, Koelbel said, and promised to cease operations, so when he saw advertisements in Wednesday and Thursday issues of the newspapers, he ordered the raid. Ass’t. Dist. Atty. Hardy said
Foto Pay-Day operates as follows:
The rack is set up just inside the lobby and a 35-cent admission
ticket entitles the holder to draw an envelope as he surrenders his
ticket. Each envelope contains one cent and some also contain certificates. These range in value from $1 and $5 up to the grand prize of $250.

Certificates are turned in at the office with the understanding that
the management is purchasing the right to use photo of the holder.
Those of $1 certificate holders can only be used in the lobby while
S5 holders may see their photo displayed on the outside bulletin
boards. Winner of the $250 certificate gives the theater owners the
right to use his photo for any purpose they may see fit.
Capt. Sam Nelson, who directed work of a dozen officers at the
station in opening the 6,000 envelopes said the work was completed
at 9 p. m. and a tally showed approximately $60 in pennies, (all
new): 122 one-dollar certificates and five $5 certificates. He said no grand prize certificate was found so total cash represented was $207.

Dist. Atty. Koelbel said a Michigan man, known to him only as
Turner, installed the photo-game at the theater. The theater owners and their attorney are to confer with the district attorney late today on disposition of the case. No warrants have been issued.

Clarence Bylsma, 2305 Blake Ave., assistant manager of the Granada Theater, has $250 tucked in the bank at the expense of the Douglas Theater.
Bylsma was sent to the Douglas last Thursday by his employer, Max Krofta, to investigate Foto Pay-Day. He not only investigated it, he
won it. “It couldn’t happen again in a million times,” chuckled
Krofta. Bylsma, a senior at Horlick High School, said he would use the money to attend college.

The Douglas Theater, 1639 Douglas Ave., will begin operations under new management July 10, Bernard and David Sherman, managers, announced.
Formerly owned by Mr. and Mrs. Walter Krusienski, the theater will be independently owned and operated by the Shermans.
Bernard Sherman owns a Milwaukee theater and David Sherman is a former druggist.
The new managers intend to live in Racine.

(September 28, 1935)
DOUGLAS THEATER INSTALLS LATEST RAINBOW FIXTURES
The Douglas theater has completed Installation of the new rainbow vari-kolor fixtures throughout the amusement house. These fixtures, which have only been manufactured for a short time, are beautiful in appearance and are made up with all available colors to be obtained in electric lighting.
With the newly installed equipment, the Douglas theater can now change the color and atmosphere as many as 104 different times, with beautiful subdued color effects to be seen in lighting as the result.
This new lighting is the same as is being used in the largest theaters of the country. The Douglas theater is the first amusement house in Racine to install this type of lighting. The installation is one of several modernization features now under way at the Douglas. The management, proposing to have the theater up-to-date in every detail, has installed a new stoker for even temperature for the comfort of patrons during the winter. Additional improvements are scheduled for completion shortly.

Does anyone know what the restaurant was called back in the 1940’s that was across the street from the Douglas Theatre in Racine, Wi? It was a husband and wife who ran it with them hiring other relatives to help. It had big double windows in front with living space above???? Trying to find out family history – all deceased and want to know more!