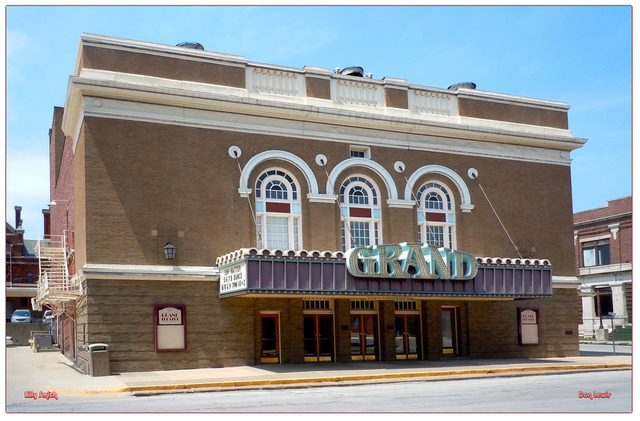 In the 1940’s it is listed as being operated by the Frisina Amusement Co.

The Grand Theatre stopped showing movies and closed in 1957. In 1987, it was restored and is now used for live entertainment, conventions and other events.

The Grand was robbed in 1971, which apparently was big news in Keokuk
http://tinyurl.com/3x9q4u

The Grand Theatre was featured as the Iowa Backroads Photo of the Day in August 2010; the photo was taken June 20, 2009.

The Grand has an official web site.

Although a couple of travel-oriented web sites and any number of link farms (and Wikipedia, not surprisingly) say that Mere F. Baker designed the Grand Theatre, this page at the Grand’s official web site says only that “[i]n a matter of a few days after the destruction Merle F. Baker, a leading businessman in Keokuk, was determined to rebuild the Grand Theatre as a community theatre continuing with vaudeville stage shows.” I’ve found no evidence anywhere else on the Internet that Baker was an architect. He was actually the Baker of Baker-Dodge Theatres, the company that operated the Grand and a number of other Keokuk movie houses.

The February 26, 1921, issue of The American Contractor has a notice that a $35,000 house was to be built at Keokuk for M. F. Baker. This was probably Merle F. Baker. It was being designed by the Chicago firm of Tallmadge & Watson. I would expect that, if Baker had been an architect, he’d have designed his own house. It seems more likely than ever that Baker was merely the co-owner of the Grand Theatre, not its architect.

I have to disagree with the comment above that states that the Grand closed in 1957. I can vividly remember going there in the 1970’s to watch movies like “Smokey and the Bandit” and “Jaws” among others, so I’m sure it didn’t close until sometime in the early 1980’s.

Interesting article about some of the Baker family that had ties to the Grand theater and their thoughts about it’s restoration. https://www.mississippivalleypublishing.com/daily_gate/news/grand-theatre-descendants-like-what-they-see-on-return-to/article_ad753ef9-86df-5c50-ab8a-746b9bc55414.html

Friday, December 7, 1923 KEOKUK’S 43 YEAR OLD OPERA HOUSE IS GUTTED IN EARLY MORNING BLAZE. About an hour after yesterday evenings last performance of Frank Craven’s comic tragedy “THE FIRST YEAR” at approximately 12:30 a.m. Keokuk’s 43 year old opera house, Known as THE GRAND since 1914, was gutted by a fire, which some believe may have been smoldering during the final act of the play. The Keokuk Opera House was constructed in 1880 at a cost of $30,000, at the time it was considered to be the most pretentious structure in Keokuk. This 60 x 68 foot building had an auditorium which could accommodate more than a thousand persons. The grand entrance was 20 feet wide and the stage was the largest in the Midwest. In 1914 The Baker-Dodge Theatre Company took over the opera house and renamed it The Grand Theatre, it continued the tradition of bringing the best in Musicals, Stage Plays and even the popular motion pictures of the times. Merle F. Baker, head of The Baker-Dodge company vows to rebuild The Grand.