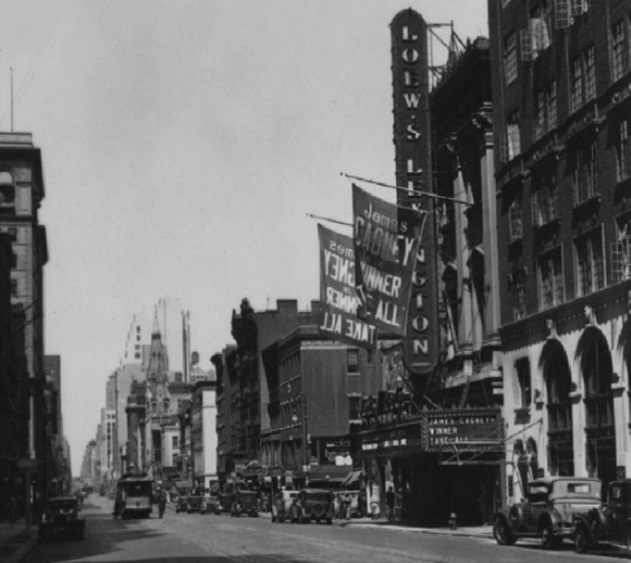 The 3,100-seat Lexington Avenue Opera House was opened by Oscar Hammerstein in 1910. There were 40 boxes arranged in four tiers on each side of the proscenium. In 1914 it was equipped with a Moller 3 manual, 33 ranks organ which had its organ chambers in the ceiling above the auditorium. In January 1916 it was taken over by an independent operator and was renamed Biltmore Theatre, becoming a movie theatre with vaudeville as part of the program. In 1918 it was sold off by the bank and had several operators until late-1923 when it was taken over by Marcus Loew. A new Moller 3 Manual 28 ranks theatre organ was installed. The top (3rd) balcony was closed off and the seating capacity was reduced to 2,500-seats. It operated as a movie & vaudeville house. In early-1927 a Wurlitzer Style 260 special 3 manual 16 ranks theatre organ was installed. This organ was removed from the building in 1930 and was installed in the RKO Proctor’s 86th Street Theatre.

Loew’s Lexington Theatre was closed on April 3, 1960. It was demolished in 1961 and the Summit Hotel was built on the site.

For a short period in 1916 this operated as the Biltmore Theatre.

It was Hammerstein’s intention of presenting American opera in his new theatre since his contract which he entered into in 1910 with The Met (in which they gave him $10 million) forbidding him from presenting classical opera in America for ten years. (He had been their major competition at his Manhattan Opera House on West 34th Street opposite Penna Station).
The only show is was able to present at the Lexington was Irving Berlin’s “Yip, Yip, Yaphank.”

Here is a 1916 ad for the Lexington operating as the Biltmore.

The 70-year-old manager of Loew’s Lexington Theatre at 571 Lexington Avenue was pistol-whipped with a revolver and robbed of $1850 last night, police reported today.

Nice old picture, first time I have heard of this theatre.

Hammerstein never sold this theatre to his friend Marcus Loew.

Hammerstein’s theatre was foreclosed in 1915. In January 1916 it was leased to a sponsor who changed the policy to movies and renamed it the Biltmore with hopes of becoming the east side version of the Broadway Strand. It was a short-lived experiment.

After much deliberation the bank auctioned it off in March, 1918. The buyer, Manhattan Life Insurance, promptly resold it a month later. The theatre changed hands again several times until Marcus Loew took it over in late 1923 and put movies back in, four years after Hammerstein’s death.

I went to this theater as a child, every Saturday. Played with the goldfish in the lobby. Red Buttons gave out Christmas gifts from the P.A.L. at this theater. Is the Loew’s that we pronounced Lowees have anything to do with the Loews Theater of today pronounced Lows?