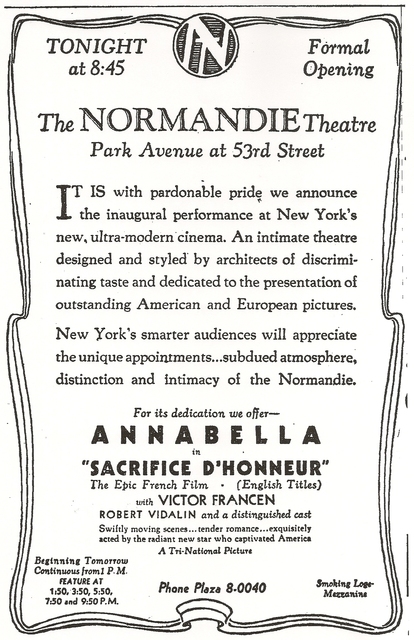 The Normandie Theatre was built in 1938, opening on October 15, 1938 with Annabella in “Sacrifice D'Honneur”. It was demolished in the 1950’s, and was one of New York’s first art houses.

Some information on it was posted in the listing for the Directors' Guild of America Theatre/57th Street Normandie Theatre. The address would place it about a block away from the Museum of Modern Art on W. 53rd Street.

Whenever I catch a showing of Hitchcock’s the Rope, I imagine this theater and the Manhattan location of that particular period frequented by the so-called “carriage trade”.

The opening day ad had incredible snob appeal. Nonetheless I regret that this theater was not around long enough for my adult enjoyment. I pass Lever House with some frequency, and there is occasionally a tinge of resentment that this landmark replaced the original Normandie.

My Dad, David Nolan was the theater manager at the Normandie for many years. Each week they published a hand bill outlining the upcoming films for the week along with local advertising and a commentary written by the manager. I have loads of these publications and I enjoy reading about days gone by and what Dad had to say about the films. I have not been able to find any photos of the Normandie Theater and would love if anyone knows where to find one.

Posting additional photos on site would be appreciated.

Thanks Al. Quite a treasure trove. Will spend hours going through it.

Here is a notice about the Normandie Theatre from the July 2, 1938, issue of The Film Daily:

“Construction work is under way on a 590-seat ‘intimate’ type talking picture theater and adjoining two-story shop building on a Park Ave. plot between 53rd and 54th Sts., owned by Robert Walton Goelet. The theater will be named the Normandie.

“The new buildings, which will face on 53rd St., were designed by Rosario Candela, architect. Hegeman Harris Co. are the builders.

“The theater will be ready for occupancy Oct. 15. It has been leased to the Normandie Theater Corp., headed by Philip Smith, who has been in the theater business for 20 years and manages a string of ‘intimate’ theaters in New England.”I find it interesting that, as late as 1938, they still referred to the project as a “talking picture theater.”

Also interesting is that in 1938, the same year he opened the Normandie, Philip Smith launched the Midwest Drive-In Company, later renamed General Drive-In Company, and finally renaed General Cinema Corporation (GCC) which grew into one of the largest theater chains in the country prior to its bankruptcy in 2000.

Intrigued by this theater. Cannot find a photo of it anywhere. BTW, beware of Mark Rivest’s site. As well-intentioned as the site may be, it’s confusingly laid out, and definitely not user-friendly. Though he has some rare photos, typos abound and I noticed a number of places where he gets his history wrong – e.g. stating that Morosco, Helen Hayes, Bijou, Gaiety, & Astor all closed in 1972. Only the Astor closed in ‘72. They were all torn down in 1982 (actually demo began in fall of 1981) to make way for what became the Marriot Marquis Hotel (and theater).

The original Normandie Theatre was said to be a replica of the theater on the French liner of the same name. The Internet has a number of photos of the theater on the liner, but the only photo I’ve found of the 53rd Street house itself is an interior shot of the back quarter of the auditorium on this web page. It’s a small scan, with limited area enlarging possible by hovering your cursor over it.