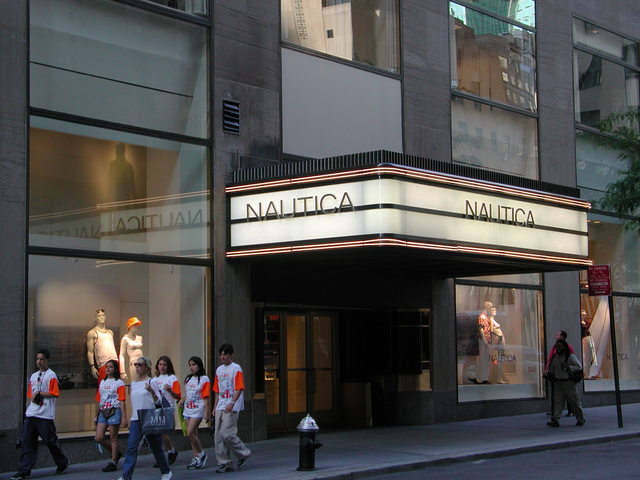 The Guild Theater opened on December 2, 1938 as a newsreel house, with an entrance on the south side of Radio City Music Hall in the Associated Press Building. Furniture was designed by Finnish designer Alvar Aalto, and aisle carpeting had a motif of ‘unwinding movie reels’ in an Art Deco style.

The Rockefeller Center landmark was later taken over by the Trans-Lux circuit in 1949. Operating under successive 25 year leases, when the most recent term expired in 1999, the Guild 50th Street Theatre was closed on September 30, 1999 with Julia Roberts in “Runaway Bride” and it was gutted.

After first becoming a Nautica retail store, it is now occupied by the clothing chain Anthropologie, which is primed for the millions of tourists who pass by the area.

The marquee of the Guild 50th Theater remains, though little other evidence exists that a theater once entertained moviegoers.

Does anyone happen to know or remember whether or not there were attendants in the restrooms of this theatre in the late 1960s?

Ah, the Guild 50th. My first trip to New York was in March 1993. And the first film I ever saw in the US was at the Guild – a showing of Disney’s Aladdin, still some 8 months before it opened in the UK.

Good footage from 1989 of outside & inside this theater from Late Show with David Letterman. http://youtu.be/P8OnsEeZA-M

I don’t see a link in any of the earlier comments to the January 7, 1939, Boxoffice article by Helen Kent about Rockefeller Centers then-new Newsreel Theatre.

Page one has photos of the exterior and the auditorium.

Page twohas photos of the lounge and Lobby.

The Guild premiered the now-classic Japanese film “Gate of Hell" in the 1950s. It played there for quite a long run, and its rich color photography was exhibited in full display on the Guild’s screen. It was also the theater where the Peter Sellers film “The Mouse that Roared” premiered. The Guild was a classic movie theater in the heart of Manhattan, which, like the Sutton, is now lost to time.

What sound systems did this theater use?

it certainly had one of the classiest most well appointed men’s rooms.

Probably because it was part of Rockefeller Center.

It was the sweetest sh!thouse in town…