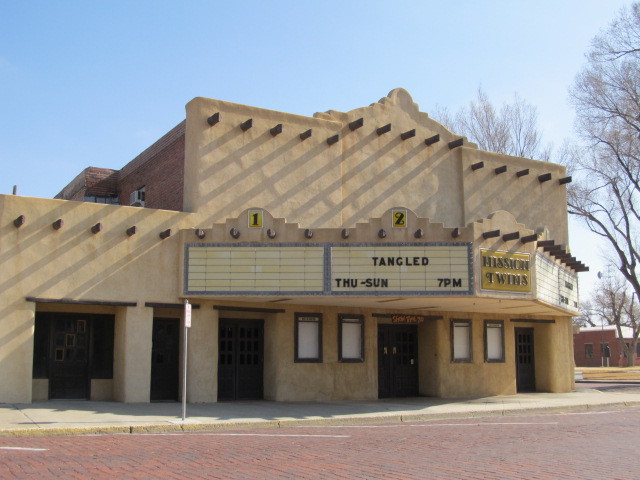 The Mission Theatre on Denrock Avenue at 4th Street in Dalhart was opened by 1926. As the name implies, the theatre was designed in Mission Revival style. It was built as a movie theatre with stage facilities. Converted into a twin, the Mission Theatre still screened movies until around 2010.

In 2011, the interior was gutted and de-twinned to convert into a church.

According to this man, he saw his first movie at the Mission in 1936:
View link

That movie, “The Plow that Broke the Plains”, was a 30 minute propaganda film promoting the New Deal’s agricultural reforms. Filmed in Dalhart and featuring a local farmer, the movie premiered at the Mission Theater.

A partial view of the Mission Theater in Dalhart on a 1940s postcard.

From the mid 1950s an almost identical photo postcard view of the Mission Theater in Dalhart as the one above.

The interior was being gutted for a church when I took this photo in April 2011.

The chuch did a first class remodel. The structure should last another 100 years. They removed the twin partions and took it down to the walls. They also opened up the original stage area. The chuch installed a digital movie projecter and surround sound. They plan to show movies on a schedule to be determined. Sounds like a win for venue that was on its way out.

i would like to see interior pictures of the mission twin and and larita (prior to air conditioning) if anyone has such. thanks