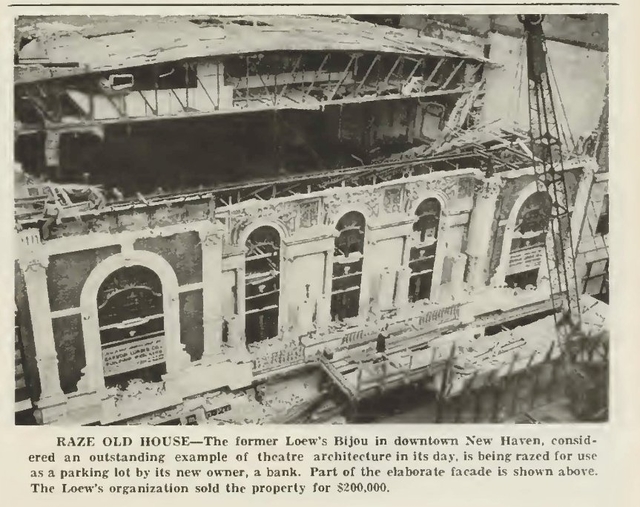 The Bijou Dream Theater was opened by 1914. It was equipped with a Hall organ. I found a photo of the Bijou Theater dated around 1915. It was demolished in 1956.

There’s still quite a few unlisted Connecticut theatres. See CinemaTour for a complete listing of all that I know.

Yes, I’ve noticed. I’m on there at least everyday. I was wondering why YOU didn’t put them in. But we all have lives, so that’s probably the answer.

There’s a picture of this theater on page 40 of Images of America: New Haven.

The third post on here with the link to the marquee is the exact same photo (with a different angle) that I saw yesterday at New Haven Union Station. If you are facing the escalators, walk to the left and along the wall you will find it at the end.

Why the heck was this great movie palace torn down?? It was on the lot next to the former FIRST NATIONAL BANK building on Church Street. The lot is just a “green lawn” with nothing on it to this day!

I’ve found a reference to Poli’s Bijou Theatre being in operation at least as early as 1913.

This essay about architect Ferdinand Von Beren, published in 1918, attributes the design of the Bijou to him.

I just added a 1938 photo, that I believe is the same Bijou as this page. This was the only Loew Poli-Bijou I can find any record of. Please correct me if I am wrong, and I will add the photo to the correct CT page.

The house listed in the 1914-1915 American Motion Picture Directory as the Bijou Dream Theatre, 26 Church Street, was probably this one.

I believe this theatre was demolished in 1956 as part of an urban renewal project.