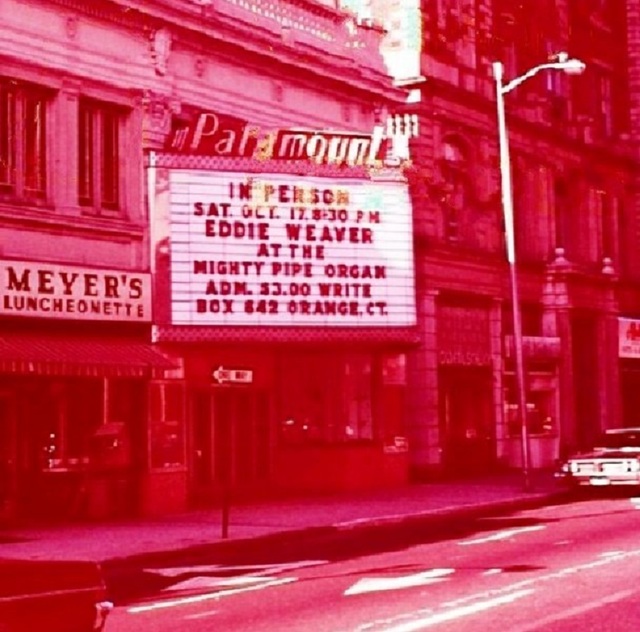 The Olympia Theater was opened on September 13, 1915. It was equipped with a Wurlitzer theatre pipe organ and in the 1920’s the resident organist was Eddie Weaver, who held the post for 10 years. Around 1930 it was taken over by Paramount Pictures Inc. and renamed Paramount Theater. It was subsequently operated by their subsidiary Mullins & Pinanski. Mentioned in a post from the Bijou Theater in New Haven by Dwight F. who played organ there on Saturday mornings in 1963.

The Paramount was razed after 1970. Its style was French Baroque.

That organ is currently in a museum in Jackson, Louisiana.

The Paramount was originally called the Olympia Theatre. The building that is now on the site is a mixed retail/office structure known as the Olympia Building.

The Paramount originally opened in 1909 as the Olympia.Had a large squarish classically designed proscenium and opera boxes on the side. Photos just prior to its 1970 closing show the balcony side walls had been covered with a very light (white with gold?) damasque pattern. Entrance by then had a v-shaped marquee out front with 7 lines for lettering. A nice one-story classical facade with retail stores to the left side.

First movie I saw here was THE MAN WHO COULD CHEAT DEATH (1959), Hammer + Anton Diffring + Technicolor, on the big screen delivered the goods. Last film: SECONDS (1966)—-there were only three or four others there, but the film made an impression, to say the least, and is regarded as the last, and most unusual, of John Frankenheimer’s ‘60s classics. Rock Hudson’s best, along with SPIRAL ROAD ('62). I went to Cross H.S. with a guy whose parents ran the Temple Luggage Shop, in the retail part of the building, a couple doors down from the boxoffice. Big theater, big screen, big sound, gone forever. Movie palace days, 1960s America.

My father, Ed Parks, along with his buddy, Pete Nellis, were the poster painters for the New Haven Paramount in c.1935/‘36/'37 when both of them were going to art school at Yale. This was the main way they earned extra money during school. My dad left the East Coast in 1938 to work as an animator for Walt Disney, and animation became his career for life. Pete was quite an art historian, and my dad later found out after the War that Pete had gotten a job helping to return many of the art treasures in Europe hidden away during the War to their rightful museums and collections, as he had an encyclopedic memory for such things. The two of them fell out of touch, but in the mid 1990s, due to some contact information in a Yale alumni magazine, my dad was able to write Pete, who did write back. It was a little sad though, as Dad still had vivid memories of their friendship, but Pete only remembered some of the paintings my dad did in class, and didn’t remember their Paramount gig in any detail.

Here is a 1924 drawing by Anthony Dumas depicting the Paramount as the Olympia Theatre. This web page has a small photo of the Olympia around 1915.