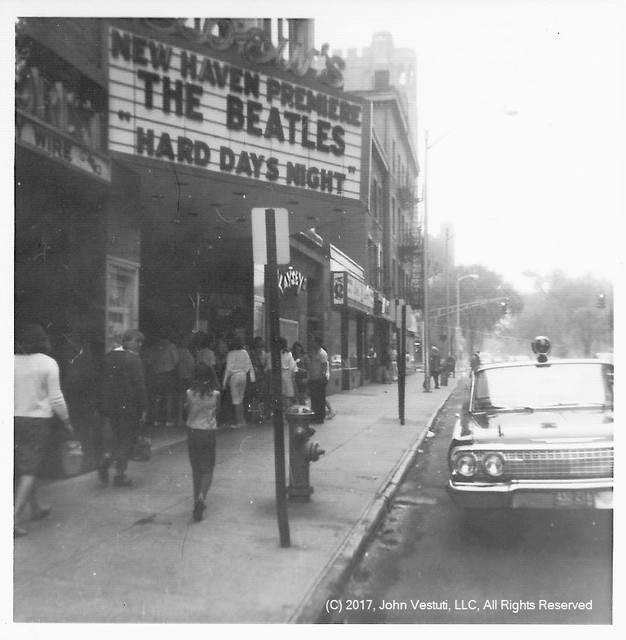 Opened as Carll’s Opera House on September 20, 1880. It had a seating capacity for 2,128. Closed in the mid-1970s, Only the lobby seems to remain of the former Loew’s College Theatre. The auditorium may have been demolished as it is no longer visible.

In New Haven 1960s you only needed three theaters [four, if you include the POST DRIVE-IN] to get the best out of ‘60s movies: the CROWN, LAWRENCE and LOEW’S COLLEGE, so named because it was on [surprise !] College Street which itself was named for Yale, which was a half-block away. We lived on Lake Place, back of the Payne-Whitney Gym, so I could walk to the COLLEGE and did, often. LOEW’S COLLEGE was THE REAL DEAL for getting the goodness from '60s movies, here’s just a few that I can remember seeing in this biggest/best downtown theater [the Paramount, around the corner was bigger, but its bookings could NOT compare]:GOLDFINGER, TWITCH OF THE DEATH NERVE, A STRANGER IN TOWN, STRANGER RETURNS, DEVIL DOLL, BURN !, CROSS & THE SWITCHBLADE, WHERE’S POPPA ?—-the term “eclectic” does not do justice to the canyon-wide variety of the COLLEGE’S offerings. Now, I’m not a sentimental man: I never go back, it’s not healthy. But I had some family business which took me back to New Haven for the first time in decades. Not only had they closed the COLLEGE, they’d turned the lobby into an Organic Health Food store [hawk-ptoo]—-with lots of activist/advocate posters, flyers, etc. And hipsters ! In my theater lobby ! [ Question: Why do these health-food characters always look like they’re in the final stages of some fatal wasting disease ? ] I hadn’t carried a gun in years, but I thought, “Me and my M-16, oh yeah, this is worth jail.”

Boxoffice magazine, August 7, 1961, has a photo of the interior.
View link

Thanks for the boxoffice photo Gerald.

The Moving Picture World of October 4, 1912, reported that the Hyperion Theatre had begun its final season as a legitimate house. It was to be operated by the Shuberts until May 1, 1914, when the lease would expire, and then be taken over by S. Z. Poli, to be operated as a movie and vaudeville house (the new Shubert Theatre opened in 1914.) The Hyperion’s career as a stage house was not entirely over, though, as I’ve found references to a repertory season being presented there by Poli in 1920.

Here is a fresh link to the 1951 Boxoffice item with photo that Gerald DeLuca linked to earlier. The item says that the seating capacity of Loew’s recently-remodeled Poli-College Theatre had been reduced from 1,400 to 1,250.

let’s not forget the Roger Sherman theater on College st.

Sometime after 1921, the entrance was reoriented to College Street. This article (which Lost Memory linked to in an earlier comment) about the partial collapse of the Hyrperion Theatre in 1998 indicates that the theater had already been condemned and that preparations for demolition had been begun at the time of the collapse. The auditorium is gone, but the 1920s College Street entrance built for Loew’s is still there.

The nomination form for the Chapel Street Historic District says that the entrance to the College Theatre was not moved to College Street until 1933:

“With the Shubert Theater and the Roger Sherman both fronting on College Street, this block became the core of the New Haven theater area. In 1929 the Crown Theater was constructed around the corner on Crown Street and in 1933 the entrance to the Hyperion was moved from Chapel to College Street so that it could compete more readily with the Roger Sherman. The interior remodelling of the Hyperion emphasized the screen over the stage. Part of the reason behind this costly renovation effort was the growing popularity of movies, but also it was the result of competition.”

The nomination form also notes that the building that became the new entrance to the theater was an existing structure built in 1915:

The College Theatre was still standing when the nomination form was written in 1984.

Additional photos of downtown New Haven can be found by searching the below site. Copy & paste to view.