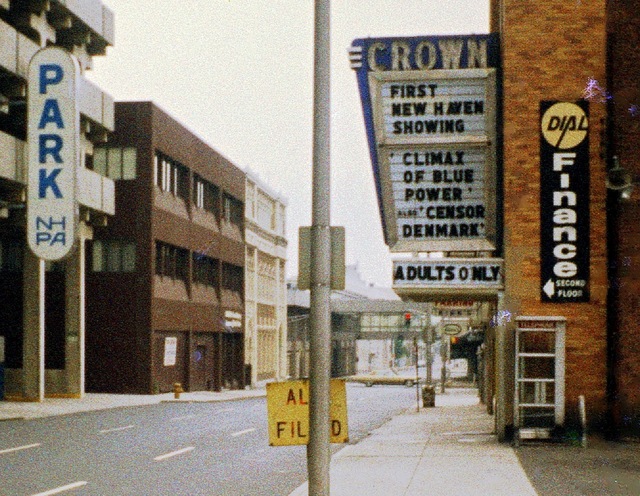 The once-again vacant Crown Theatre has been home to numerous nightclubs over the years. The marquee currently advertises one called Myst.

I was there yesterday checking it out. I’ve been by it before but it doesn’t look like a theater from the back. Anyway, on the above pic, the awning to the left is for the LoRocco Apartments upstairs and the club now housed in the theater is Hula Hank’s. It was closed and only open Wed-Sat. It’s a nice building from the outside and there'a small eatery next to the venue called “PB and J’s”.

I was in Hula Hank’s recently—the former Crown Theatre. Once inside you can tell it was a movie palace. The proscenium’s shape is still there, as well as the now walled-off balcony. The signage for Hula Hank’s was the theatre’s marquee in its later years. I’m guessing the original entrance was at the center of the building—which currently serves as the lobby for the rest of the space. There is a ballroom and office space upstairs. The uppermost floor was added onto the building. If you look at the side of the building from the outside, you can tell it was a theatre.

The marquee is way too small and the tunnel entrance doesn’t look like a typical movie entrance. Well, you’re right about the outside. To me it didn’t look like a movie palace staging but there is a small door at the top where a dressing room may likely have been.

I finally made it inside. Too many times I was in New Haven at a time when it was closed. First off, I went in the original front doors of “The Rice Tower” and there was a nice chandelier and nice banisters. Downstairs is nothing but a hospital clinic. Upstairs, on the right is a glass tile wall and if you look through it, you can make out theater doors and ornate tiles where the wall meets the ceiling. Almost like looking through blurry windows to another reality.

Then I went inside Hula Hanks where they were hanging Halloween decorations and I told them why I was there. They were receptive. Pretty lively joint inside. Lots of islandy aesthetics. The proscenium is quite clear as a bar is below it. The paint scheme is all blue skies and white clouds. This place was quite small, smaller than the Whalley Avenue Theater by 500 seats. The balcony behind has one large window and a few to the right and that seems kind of small. No door on the upstairs leads to it but fronm the ground floor near the entrance. There is a catwalk/stairwell on both sides wrapping around the orchesra with a DJ booth/tent in the far right corner at the stage. There’s a bar on the left and on the right is booths with a tv in the wall at each booth. Not a bad scheme, but it definitely feels narrow and I’m sure it did in those days, too.

Here is the Hula Hanks site. Looks like function should be restaurant or restaurant/bar.
http://tinyurl.com/ydsqz6l

The CROWN Theater 1960s showed many fine films—-I remember being impressed with THE BEDFORD INCIDENT, LOVE ON A PILLOW and other foreign films, even indie-freak stuff like INCREDIBLY STRANGE CREATURES. Louis Lunch, iconic lunch spot that has the BEST burgers in New Haven [for over 100 years !] was right on the corner. But what really made the CROWN THE REAL DEAL was their Sunday-Monday horror film twin-bill. For years, I drank deep on horror films that were a mix—-some as recent as the previous year’s, like THE TERROR/DEMENTIA 13, BLACK SABBATH/EVIL EYE, etc. Now and again they would pair up two disparate horror films to great effect: BLOOD AND ROSES/THE FLY is one twin-bill that stands out. Horror movie double-features, vanished world.

The Crown changed its format many times to respond to the changing film market and audience. It was tough to stay open in the 60s in New Haven, as witnessed by the demise of the nearby Lowis Poli, Paramount, and College Theaters. The Crown, Lincoln, and York Square Theaters were all owned locally by Leonard Sampson and Robert Spodick. The Crown, once an art theater, shifted to repetory (and not in competition with the Lincoln as noted above), horror films, and then e-rated films. Among its colorful history, the theater was raided by the police and closed for showing Milo O'Shea in Ulysses due to language (it was a different time then; later is was the house that showed Deep Throat, Behind the Green Door, and other “classics” of the genre. It did have a small marquee, but that was in part because the original marquee was hit by a truck and badly damaged in the 50s. When the Crown and Lincoln closed, the two owners shifted their art and foreign films, and repetory to the York Square.

My fondest memory of the Crown was when my friends and I opened a can of a newly created scent we had just cooked up with a chemistry set that was popular at the time. It had all the properties of low tide, rotten eggs, dead rats in a haunted house, and then some. Needless to say the theatre emptied out quicker than if someone had screamed “Fire.”

1960’s memory: In my youth, the Crown Theatre was off-limits because it showed “films for adults” according to my father. (needless to say, I went to the Crown whenever I could!) One of my fondest memories of that time was when (1964) – to my great surprise – my father took me to see “Les Parapluies de Cherbourg” at the Crown.

This theatre is not open. It has been closed for many years.