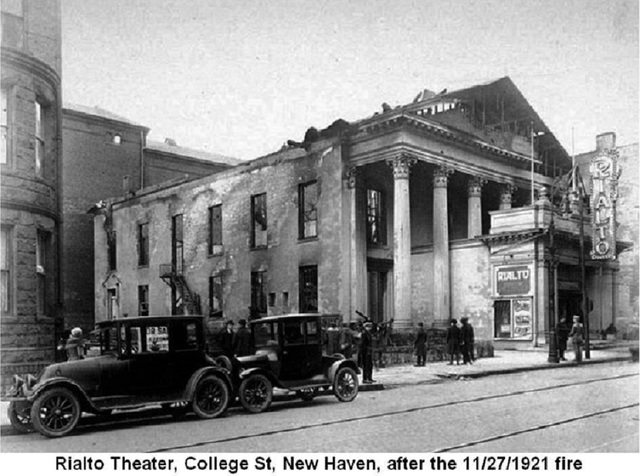 The Rialto Theater was a silent era theater that was destroyed in a fire in November of 1921.

Here is an article about the burning of the Rialto Theatre from The New York Times of November 28, 1921.

The Rialto Theatre occupied a Greek Revival building originally built as the College Street Congregational Church in the late 1840s. The building was bought by Yale University in 1898, and it served as the University’s school of music for about two decades before its conversion into a movie theater. The house seated about 500, and was full the night of the fire. The ultimate death toll from the fire was nine, with over a hundred injured.

The article I linked to in my previous comment says that the Hyperion Theatre was located “…around the corner from the Rialto, in Chapel Street, and the roofs of the theaters come close together.” That means the Rialto must have been in the 200 block of College Street, just south of Chapel Street. The article also notes that the Rialto was across the street from and north of the Shubert Theatre, which is still standing at 247 College Street.