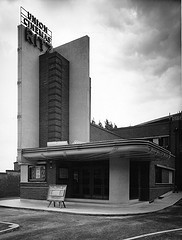 Designed by noted cinema architect Eric Norman Bailey of Maidenhead, the Ritz was built for Union Cinemas and opened on 29th May 1937.

A feature of the facade elevation was a slender fin tower feature that carried the name Union Cinemas Ritz on its top. Inside the auditorium the seating was arranged on a stadium plan, with seating in the circle being in a raised area that didn’t overhang the stalls.

Union Cinemas were taken over by Associated British Cinemas (ABC) in 1937 and they operated it until it was sold to Star Cinemas in June 1969.

It passed to an independent operator from 1st November 1977 and they converted the main auditorium into a bingo hall and used 180 cinema seats in the circle area on occasions when movies were shown. It went over to full time bingo from 10th November 1979 and in 1981 an extension was built onto the front of the main building to house a small cinema and the former circle was partitioned off to create a second screen seating 190. One of these screens closed in August 1990 and the other on 10th January 1991.

Bingo continues in the building, operated by Gala, but it has been stripped of all its original internal features and externally it looks nothing like a former cinema.